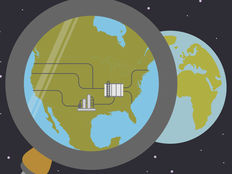 As ESG considerations continue to gain traction globally among the investment community and stakeholders at large, companies across sectors have adopted an emphasis on reducing emissions and operating in a more environmentally-conscious way. Energy infrastructure companies have also been focused on improving their environmental profile, with a number of names announcing explicit targets for reducing emissions. Today’s note examines the key initiatives midstream companies are implementing across their operating footprint to reduce emissions, including optimizing energy consumption, modernizing assets, and scaling the use of renewable energy.

Innovation and more efficient operations help mitigate emissions.
For midstream operators, managing the energy consumption of their systems and/or modernization of assets presents viable methods to drive efficiencies and reduce emissions. For example, making the switch from generators to grid electrical power has been a key efficiency initiative for many, including Plains All American (PAA). According to PAA’s 2020 Sustainability Report, over 44 diesel and natural gas generators across the company’s asset base were eliminated by connecting directly to the electrical grid in 2020. Similarly, Equitrans Midstream (ETRN) recently began a new initiative for its compressor stations and facilities that is expected to drive a 20% reduction in methane emissions relative to 2019 when completed by the end of 2022.

Some midstream companies have taken innovative approaches and implemented unique technologies to optimize their energy consumption. As noted in its 3Q21 press release, Enterprise Products Partners (EPD) is modifying the design of the heaters for its second propane dehydrogenation plant (PDH II) to use co-produced hydrogen as a fuel instead of natural gas. The adjustment will reduce the carbon emissions from PDH II by 90% while saving $50 million in capital costs for the plant, which is expected to start up in 2Q23. Leveraging patented technology, Energy Transfer (ET) uses a natural gas compression system that can switch between the grid and natural gas for power. The dual drive system was credited with reducing CO2 emissions by more than 630,000 tons last year alone – equivalent to removing ~137,000 passenger vehicles from the road. These examples only provide a glimpse into some of the ways midstream companies are reducing emissions through asset modernization and energy consumption management.

Powering midstream assets with renewable energy will make decarbonization possible.
While many midstream companies today are already incorporating renewable power into their energy mix, scaling the use of renewable energy will play a critical role toward incremental emission reductions, whether through direct investment in renewable power or power purchase agreements (discussed below). This is an essential part of the plans laid out by many of the midstream companies that have set net-zero emission targets by 2050, including Enbridge (ENB), Williams (WMB), EnLink (ENLC), and ETRN. Others are also focused on sourcing renewable power. According to Kinder Morgan’s (KMI) 2020 Sustainability Report, renewable energy from self-installed solar panels has proven optimal for powering facilities distant from an existing electrical grid, resulting in cost savings, increased energy efficiency, and lower emissions. In 2020, Williams (WMB) created a team dedicated to the development of solar power generation to provide electricity for its natural gas compression and processing facilities. According to its 2020 Sustainability report, WMB has 16 solar projects currently under commercial development that are expected to reduce WMB’s electric consumption by 16% relative to historical norms. Many midstream companies also deploy solar-powered metering stations, including EPD and ET which have thousands of them. ET also owns a gas-fired electric generating facility in Pennsylvania that is fully powered by renewable gas produced from a landfill, according to its 2019 Sustainability Report.

Sourcing renewable energy provides benefits for midstream and the environment
As the cost of renewable energy continues to fall amid increasing output and wider availability, midstream companies stand to benefit. Today, midstream companies are increasingly sourcing wind and solar energy to meet power demands, decarbonize their value chains, and reduce operating costs. Late last year, Keyera (KEY CN) announced it had signed a 15-year solar power agreement with Samsung Renewable Energy to source 10% of Keyera’s electricity needs beginning in mid-2022. More recently, on November 2, Targa Resources (TRGP) announced a long-term power purchase agreement to source renewable energy from Concho Valley Solar. The delivery of renewable energy is expected to begin in 4Q22 and will provide power for TRGP’s natural gas processing assets in the Permian Basin. On September 22, ET announced it had secured its second agreement to source solar power in Texas, having inked a 15-year agreement with SB Energy. TC Energy (TRP CN) and EPD are among other midstream names that have announced renewable power purchase agreements more recently.

Bottom Line:
Midstream companies are pulling multiple levers across their organizations to reduce the carbon footprint of their operations and enhance their environmental profile as many stakeholders focus on ESG initiatives. Continued progress with reducing emissions reflects midstream’s growing commitment to contribute to a cleaner energy future.

Midstream Partnering for a Cleaner Tomorrow