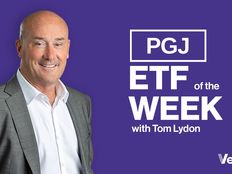 Despite the unrest in China, the market has rallied. China had a strong November despite widespread protests over the COVID lockdowns. “You look at it from a fundamental standpoint, the China economy has been beat up dramatically. It’s way off its highs,” Lydon said, citing a host of stresses, including on the regulatory front. Noting that despite the challenges, PGJ was up over 30%, he continued, “is this a rebound? Is this ETF going to go above its 200-day average? Its really close right now.”

China also has attractive valuations right now. According to Lydon, PGJ’s holdings include a number of internet companies that aren’t just listed in China but also on U.S. exchanges. Lydon noted the holdings include a number of well-known firms, like JD.com and Alibaba. He said, “these are all the online internet companies that have put China’s stock market on the map, but at the same time have suffered mightily in the last couple of years. The thing is they’re not going away.”

There some risks, however; Lydon took care to point out that there is a chance that some of these companies won’t get listed in the U.S. But there’s an opportunity in that, as Lydon thinks that China and the U.S. will work something out in the 11th hour.

PGJ was priced around $90 a share in early 2021. By the end of October it fell all the way to $19. “The move off the bottom to $26 dollars, although percentage wise it seems huge, is still just a blip on the screen,” Lydon said. “However, if this is on the way to recovery, this is something you want to take note of, and China as a market is not going away.” Given China’s current valuations, Lydon shared that people he’d spoken to are seeing this as a generational opportunity.

Asked where the money comes from by Jaffe, Lydon said, “I think the key word is diversification.” He pointed to U.S. investors having a home-country bias and indicated that PGJ could make a possible diversification play in an equity portfolio.