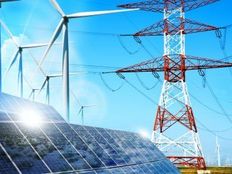 Lots of Renewable Energy Rebound Candidates in This ETF

While there were some encouraging headlines and political moves this year, renewable energy equities will wrap up 2022 in disappointing form, but there is a silver lining.

That silver lining arrives the form of clean energy exchange traded funds, such as the Invesco WilderHill Clean Energy ETF (PBW B), now being homes to an array of stocks that could be prime bounce-back candidates in 2023.

That case is supported by fundamentals and isn’t rooted in the notion that simply because renewable energy equities slipped this year they’re due to bounce back in 2023. Speaking of fundamentals, the International Energy Agency (IEA) recently forecast that nearly 3,900 of gigawatts of new renewable power will come online over the next five years.

Looking ahead to 2023, analysts remain bullish on select solar and wind energy stocks, plenty of which reside in the PBW portfolio. The ETF, which tracks the WilderHill Clean Energy Index, holds 84 stocks. That’s one of the larger lineups in the renewable energy ETF category, and as such, PBW features ample exposure to solar and wind names, among others.

Among the PBW components that Wall Street is bullish on is ReNew Energy Global PLC (NASDAQ:RNW), which is one of the ETF’s holdings from the utilities sector. That group accounts for almost 8% of the PBW roster.

Renew is a “Nasdaq-listed company that primarily builds and operates solar and wind energy projects in India. The median average of analyst price targets shows that the stock is expected to rise by 84.5% in the next 12 months,” reported Ganesh Rao for CNBC. “The firm, which counts Goldman Sachs as one of its investors, is expected to see revenues soar by 24% next year. Last month, it signed an agreement with Egypt to set up a green hydrogen plant in the Suez Canal with an investment of $8 billion.”

Analysts are also constructive on multiple solar names, some of which are PBW member firms. That group includes Sunnova Energy International Inc. (NASDAQ:NOVA).

That stock “has the biggest potential upside, with shares expected to rise by 72% to $36, according to the median average of analyst price targets,” according to CNBC. “The residential solar energy provider is expected to report a 41% gain in subscribers by the end of this year compared to last year. It will likely continue on those substantial gains and see sales grow by 42% next year.”