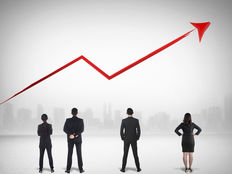 The Trump administration urged Congress to pass a smaller Covid-19 relief bill as negotiations on a broader package ran into roadblocks, Reuters reports.

“The market has come to a realization that stimulus is going to be coming … no matter who is the president. It’s probably going to be coming about a month out from now,” Robert Pavlik, chief investment strategist and senior portfolio manager at SlateStone Wealth LLC., told Reuters.

Many investors are beginning to warm up to the idea of a Democratic win in the upcoming presidential elections. Observers now believe that a win for Democratic nominee Joe Biden would ease trade tensions with China, relieve tariff pressures on the U.S. economy and bolster bets of a large stimulus package passing through.

Furthermore, market watchers are anticipating a stronger earnings season or at least better than the previous quarter. Analysts expect third-quarter earnings for S&P 500 companies to decline 20.7% year-over-year, compared to the 30.6% plunge for the second quarter.

“There is a big sense that [the third quarter] was a big quarter for growth in the U.S.,” Kit Juckes, macro strategist at Société Générale, told the Wall Street Journal. “It’s economically not as bad as our worst nightmare.”

Jeffrey Kleintop, chief global investment strategist at Charles Schwab. Traders will also be looking, argued that the markets will be watching for any signs of business confidence and that “precautionary cash hoards may turn into dividends next year.”

“It isn’t so much about the numbers and the degree to which companies beat estimates,” Kleintop told the WSJ. “It’s those words that matter more and the tone and confidence from business leaders.”