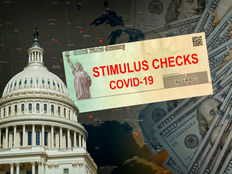 U.S. markets and stock exchange traded funds continued to strengthen Tuesday as the Federal Reserve begins a massive $2.3 trillion program aimed at supporting local governments and businesses that were weakened by the coronavirus pandemic.

The Fed will work with banks to provide 4-year loans to companies of up to 10,000 employees and directly buy bonds of states and more populous counties and cities, Reuters reports.

“(The Fed’s move) should give some confidence to investors, that the risks this time around are maybe not the same as the risks in the financial crisis,” Randy Watts, chief investment officer at O’Neil Global Advisors, told Reuters. “While this rally has been impressive, the market probably is a little bit of ahead of itself and we would not be surprised to see a pullback from here.”

The energy market also advanced on rising oil prices as the Organization of Petroleum Exporting Countries and other major oil producers negotiate on production cuts as big as 20 million barrels per day, or about 20% of global supply.

While the mood on Wall Street has grown more optimistic, the ongoing restrictions to contain the coronavirus outbreak have fettered the economy and fueled widespread production cuts, layoffs, and projections of a severe recession. For instance, data Thursday showed 6.6 million Americans applied for unemployment benefits in the first week of April.

“A rally doesn’t mean we’re out of the woods just yet nor that volatility is a thing of the past,” Mike Loewengart, managing director of investment strategy at E*TRADE Financial Corp, told Reuters. “If there is one thing recent history has shown us, it’s that optimism can wear off quickly if cases climb or stay-at-home orders are extended.”