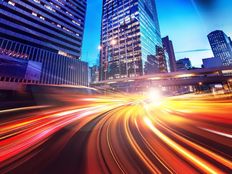 With Inflation Speeds, Protect Portfolios With This ETF

The latest consumer price index report from the U.S. Department of Labor shows that inflation is still at a record high and continuing to climb. Inflation rose 8.5% in March over the last 12 months, the department announced on Tuesday. This is up from the 7.9% annual rate in February and the largest 12-month increase since the period ending December 1981.

Spurred by rising food and energy prices, constraints in the supply chain, and increased consumer demand, inflation has now been more than 6% — well over the Federal Reserve’s 2% target — for six consecutive months.

Russia’s invasion of Ukraine drove up oil and gasoline prices 11% in March from the prior month, while the cost of groceries rose 1.5% in March from a month earlier.

“There’s an element of sticker shock when people go to fill up their tank or go to the grocery store,” said Moody. “Lower- and middle-income households are already having to make choices about what to buy because they’re having to pay so much more for food and energy.”

The core price index, which excludes food and energy, increased 6.5% in March from a year earlier. This marks an increase from February’s rise of 6.4% and the steepest 12-month climb since August 1982. The overall consumer price index accelerated at a seasonally adjusted 1.2% last month, from 0.8% in February, the fastest monthly increase since 2005.

Investors looking to protect their portfolios from the increasing risk of high inflation may want to consider the Invesco PureBeta 0-5 Yr US TIPS ETF (PBTP B). PBTP seeks to track the investment results of the ICE BofA 0-5 Year US Inflation-Linked Treasury Index. The fund generally will invest at least 80% of its total assets in the securities that comprise the underlying index.

The index is designed to measure the performance of the shorter maturity subset of the U.S. TIPS market, represented by TIPS with a remaining maturity of at least one month and less than five years. Fewer years means that investors are less exposed to duration risk.