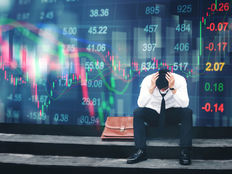 With stocks falling apart in their worst four-day performance since December 2018, now in negative territory for the year, investors are scrambling to take cover and decide where to reallocate assets.

Stock indices opened down roughly 3% on Monday from where they finished last week, losing more than 3% of their value within minutes of the opening bell. The losses were generally expected, with Dow futures down more than 800 points earlier in the day following reports that the coronavirus outbreak had deteriorated considerably in China and was starting to more rapidly spread a variety of other areas like Italy, Iran, South Korea and beyond.

“The second-largest economy in the world is completely shut down. People aren’t totally pricing that in,” said Larry Benedict, CEO of The Opportunistic Trader, adding a 10% to 15% correction in stocks may be starting. He also said some parts of the market, particularly large-cap tech stocks, appear to be over-owned. “It seems like there’s much more to come.”

“The market had been sanguine about the spread of the coronavirus,” said Quincy Krosby, chief market strategist at Prudential Financial. “That sanguine stance is being tested today.”

While many investors are considering traditional safe haven assets such as gold or Treasurys, more aggressive and savvy investors can explore another option: inverse ETFs.

For those unfamiliar with the instruments, according to Investopedia, and inverse ETF is “An exchange-traded fund (ETF) constructed by using various derivatives to profit from a decline in the value of an underlying benchmark. Investing in inverse ETFs is similar to holding various short positions, which involve borrowing securities and selling them with the hope of repurchasing them at a lower price.”

Essentially, as stocks decline, the value of inverse ETFs increases, giving an investors a way to play the downside of the market by buying an ETF instead of directly shorting the market. There is still inherent risk with this method, but for savvy investors, there is also tremendous opportunity when used correctly.

The ProShares Short QQQ (PSQ A) is an ideal ETF with which to accomplish that objective.

This short ProShares ETF seeks a return that is -1x the return of its underlying benchmark (target) for a single day, as measured from one NAV calculation to the next. Due to the compounding of daily returns, ProShares’ returns over periods other than one day will likely differ in amount and possibly direction from the target return for the same period. These effects may be more pronounced in funds with larger or inverse multiples and in funds with volatile benchmarks. Investors should monitor their holdings as frequently as daily.