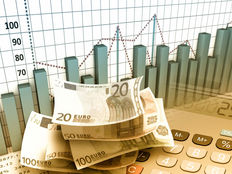 The battered euro currency has already dipped to its weakest level since 2017, and more traders are betting that it could weaken even further. Currency traders can consider bearish or inverse exchange traded funds to hedge against a further depreciation in the euro.

The euro currency has declined 3.1% against the U.S. dollar to $1.0838 Thursday, and some are betting on more pain ahead.

Options markets reveal an increasingly negative outlook on the EUR as investors are paying up to hedge against the European currency that is quickly depreciating against the greenback, Bloomberg reports. The euro has continued to slide despite improved risk sentiment, revealing potential pressure ahead regardless of how recent risk-off events like the coronavirus develops.

“The euro is currently subject to a lower trend on both pro-risk and risk-off scenarios,” Neil Jones, head of foreign-exchange sales to financial institutions at Mizuho Bank Ltd, told Bloomberg. “It suffers as a funding currency in terms of risk-on in the hunt for higher yield, while during times of risk aversion the greenback as a safe haven looks to outperform.”

In light of the ongoing weakness, there has been an uptick in options to sell the euro that would pay out should the currency slide below $1.08. These options represent one fourth of the total notional value of euro vanilla puts traded in February and an additional 5% are targeting a even steeper drop to $1.05.

“The hope for many was that Europe would pick up pace and outshine U.S. financial assets as the former supposedly recovered in the first quarter,” Danske Bank strategist Lars Merklin, told Bloomberg. “But this hope for Europe (and emerging markets) outperforming the U.S. never got going and turning positions into short euro-dollar is now the consensus story.”