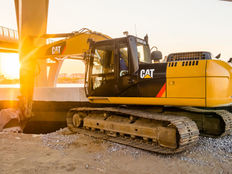 Caterpillar disappointed investors in Wednesday’s trading session as the construction equipment manufacturer missed analysts’ expectations for its third-quarter earnings results and lowered its forecast for the rest of the year. This kept ETF investors who were looking for signs of construction strength translating to real estate strength at bay.

Per a CNBC report, Caterpillar “earned $2.66 per share in the third quarter, versus the consensus estimate of $2.88 per share, according to Refinitiv. Revenue came in at $12.758 billion, while Wall Street expected revenue of $13.572 billion. The company also lowered its full-year earnings per share forecast to a range of $10.59 and $11.09 from $12.06 and $13.06 a share. Analysts expected an outlook of $11.70 per share. The company said it now expects fourth-quarter demand to be flat, dragging down by a $900 million reduction in inventories.”

“Realistically this is what you wanted to see, you wanted to see them take fast action,” said Rob Wertheimer, founding partner at Melius Research. “The worst thing you could have….is if you get too far behind the curve on stocking up and then you have to cut later.”

“The trade war leads people to bring in inventory, buy a bit little extra [because they’re thinking]‘who knows what’s going on, let’s make sure we stock up ahead of tariffs,’ and that’s coming back out of the economy right now,” Wertheimer said on CNBC’s “"Squawk Box":https://www.cnbc.com/squawk-box-us/.”

This year, the central bank has been keen to cut interests during the last two policy announcements, but how low doe rates have to go in order to spark a rally in home buying? Inventory levels are suffering, which has caused prices to rise and put would-be home buyers out of contention for real estate purchases.