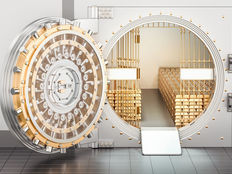 Gold ETFs, including the SPDR Gold MiniShares (GLDM) and SPDR Gold Shares (GLD A-), have been supported by an array of factors this year, including global central banks’ increasing affinity for bullion.

Gold ETFs are pushing to upside amid increased expectations of a U.S. rate cut, even as some investors locked in profits from bullion’s recent rally. Gold is believed by many investors to be inversely correlated with interest rates. Rising interest rates make bonds and other fixed-income investments more attractive, so money will flow into higher-yielding investments, such as bonds and money market funds, and out of gold, which offers no yield at all during times of higher interest rates, and back into gold ETFs.

“Today, central banks around the globe hold approximately 33,200t—or 17% of the world’s above-ground gold,” said Juan Carlos Artigas of the World Gold Council (WGC) in a recent note. “And that has grown steadily since 2010—hitting an annual total of 651t in 2018—the largest annual net purchases since 1967.”

Investors have looked to GLD as a quick and easy way to gain exposure to gold price movements as they hedge against market risks, help protect their purchasing power in times of inflationary pressures, or capitalize on increasing demand from the emerging markets with a growing middle-income class.

Boosting the case for gold is that the Federal Reserve recently alluded to no more rate hikes for the rest of 2019 after initially forecasting two. The capital markets initially expected rates to remain steady after the central bank spoke in more dovish tones following the fourth and final rate hike for 2018 last December.

“For two decades prior to 2010, central banks were a net source of supply for the gold market. But that changed in 2010, with central banks functioning as a net source of demand, making up 10% of annual demand on average between 2010–2017, a figure that increased to 15% in 2018,” according to Artigas.

“And the decade-long buying trend appears to have some staying power, with net purchases in Q1 2019 increasing 68% over Q1 2018,” said Artigas. “Notably, the gold buying was highly concentrated among emerging market central banks, making up approximately 93% of the 145.5t purchased in Q1 2019.”