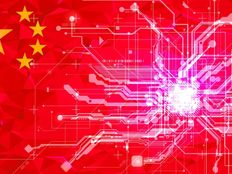 As U.S.-China trade negotiations move forward, one of the hot-button issues will no doubt be technology. Whether a positive trade deal results or not, China will continue with its ever-expanding technology initiatives, which bodes well for tech-focused exchange-traded funds (ETFs).

Journalist Rebecca Fannin delved deeper into these initiatives with her book: “"Tech Titans of China: How China’s Tech Sector is Challenging the World by Innovating Faster, Working Harder and Going Global":https://www.amazon.com/Tech-Titans-China-challenging-innovating-ebook/dp/B07MJ5Y7B4.”

“Some of it has to do with venture capital investment. And some of that venture capital investment has come from Sand Hill Road [Silicon Valley] funded by our pension funds, our universities, our endowments, our family offices,” said Fannin in an interview with Knowledge@Wharton. “But I also think a lot of it has to do with China’s own entrepreneurial culture. It’s innovating very fast. It’s moving very swiftly. They are working nonstop. China’s entrepreneurs and the tech sector are just very ambitious. It’s unstoppable.”

One of the areas where China excels in its tech is social commerce, but what is that exactly?

“Social commerce is all about online shopping and sharing and prizes and games,” said Fannin. “It’s a business model that we really don’t have in the U.S. Social commerce has come on very strong. There is a [group-buying platform] called Pinduoduo, which went public in New York last year and has gone on to become one of these tech giants in just three years’ time. They are already China’s second-largest e-commerce player, and they’ve developed this whole new business model around social commerce.”

5G Will Get Attention

Specifically, Fannin cited 5G as one of the subsectors of tech that will get a lot of attention.

“5G is one of those clear battlegrounds,” Fannin said. “Huawei is the No. 1 telecom equipment operator, and the U.S. is not allowing Huawei equipment to be sold into the U.S. This is going to be an area that the U.S. needs to catch up in. Right now, the U.S. doesn’t have a 5G player. The main players are Huawei and GTE from China, plus Nokia and Ericsson. China is outspending us on 5G wireless infrastructure and those towers that need to be built. So, 5G is coming very soon, and this is going to be one area to watch.”

One fund investors can take advantage of when it comes to China tech is the Invesco China Technology ETF (CQQQ B-). CQQQ is based on the AlphaShares China Technology Index, which is designed to measure the performance of the investable universe of publicly-traded information technology companies open to foreign investment that are based in mainland China, Hong Kong or Macau.