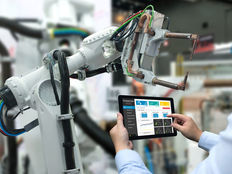 The  *Robotics & AI Bull 3X ETF (UBOT)* is up over 40 percent thus far year-to-date and more could be on the way as the global robotics race could get interesting with the second largest economy joining the scrum.

Per a South China Morning Post report, the “Chinese government sees the use of robots as a way to upgrade the nation’s manufacturing industry, with a goal of producing 100,000 locally made industrial robots annually by 2020, equal to a robot density of 150 for every 10,000 employees. To reach that goal, the government has been financially supporting the domestic robotic industry for the past five years, with the subsidies accounting for 20 per cent of the industry’s net profit in China, according to Sinolink Securities.”

UBOT seeks daily investment results equal to 300 percent of the daily performance of the Indxx Global Robotics and Artificial Intelligence Thematic Index, which is designed to provide exposure to exchange-listed companies in developed markets that are expected to benefit from the adoption and utilization of robotics and/or artificial intelligence.

It’s a contentious topic given that in the business world, it’s either adapt or die. For China, it currently ranks number 20 in terms of robot density, but the hope if for that to improve with more research and development.

“Although many robotic companies are able to produce various kinds of robots, the reliability and the quality of core components need further improvement. For example, microchips used in robots depend on imports from overseas,” said Dai Zhendong, director at the Institute of Bio-inspired Structure and Surface Engineering and a robotics professor at Nanjing University of Aeronautics and Astronautics. “Once trade conflict occurs, like the situation ZTE faced [in 2018], the robotic industry will face serious pressure.”