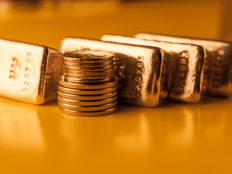 Bond prices went higher, inversely causing yields to fall, but the safe-haven scramble couldn’t make its way to gains for gold as concerns regarding the coronavirus in China made its way into the capital markets. The gold market reacted negatively as China is a major purchaser of the precious metal.

“This unfavourable development could not come at a more critical time with many people expected to travel within China before the Lunar New Year,” wrote Lukman Otunuga, senior research analyst at FXTM, in a daily research note. “The outbreak certainly presents an economic risk to China and its close neighbours, especially if tourism, air travel and other industries are affected.”

Global concern regarding a worldwide outbreak is eerily similar to 2002-2003 when a SARS outbreak put markets on watch.

“The world is reacting in a deflationary manner to the news of a spread of the pneumonia like virus in China,” said analysts at Zaner Metals. “The trade is justified in factoring in some slowing fears and that in turn has applied pressure to gold, silver and nearly every physical commodity.”

“Increasing the potential deflationary impact of the new virus is the fact that the Chinese New Year celebrations start this coming weekend and that usually results in roughly 300 million people traveling inside China, and reducing that dramatically would remove a tremendous annual stimulus for the Chinese economy,” the analysts added.

However, the tide could turn for gold as the precious metal is still considered a safe haven asset when the equities markets go awry. It remains to be seen how gold prices react to the virus concerns in China.

“Gold is set to remain the prime destination for safe haven buyers this week as developments in China and caution ahead of the Davos summit dent risk sentiment,” wrote Otunuga, with reference to an yearly gathering of business leaders in Davos, Switzerland.

Gold has become more accessible than ever thanks to options via an exchange-traded fund (ETF) wrapper like the  SPDR Gold Shares (GLD A-) and the SPDR Gold MiniShares (GLDM). Precious metals like gold offer investors an alternative to diversify their holdings, and like other commodities, gold will march to the beat of its own drum compared to the broader market.