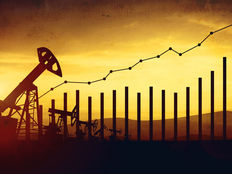 Are Dark Clouds Ahead for Bullish Oil Traders?

While the volatility rain appears to have subsided for equities, cloudy skies may still hang around when it comes to oil prices. The trade war impasse between the U.S. and China could keep bullish traders away from bold, leveraged plays in exchange-traded funds (ETFs).

The U.S. China trade war could negatively affect crude oil shipments, which could tamp down any possible gains for oil prices. Per a report by CNBC, “China is expected to dramatically reduce its intake of U.S. crude imports over the coming weeks, energy analysts have warned, following the latest flare-up in trade war tensions between the world’s two largest economies.”

That report comes as oil prices have been trending down in addition to the market volatility seen in equities. More pain could be ahead as China, one of the major purchasers of U.S. crude, starts to pare down its intake.

“All things considered, the U.S. crude-export machine may struggle to maintain its record-breaking run,” Brennock added.

While in general, the U.S.-China trade war may be seen as a net negative for the capital markets, traders have been embracing the volatility that’s returning. While the tariff-for-tariff war wages on, China could target U.S. oil next, which could make way for some interesting energy plays.

Just as the capital markets were responding to the upside on the heels of the 25-basis point rate cut by the Federal Reserve, U.S. President Donald Trump’s imposition of tariffs sent the markets back down. Oil prices saw their worst performance in four years, but opportunities could be ahead for energy ETFs.

For the markets hoping that future rate cuts could be on the way, Powell dashed their hopes by saying it wasn’t the trend, but merely a “mid-cycle adjustment.”

Trump’s announcement that a 10 percent tariff would be applied to another $300 billion worth of Chinese goods and China’s response with retaliatory measures sent the major indexes on a rollercoaster. If traders want to use this as an opportunity to jump into the energy sector, they need to pick their spots.