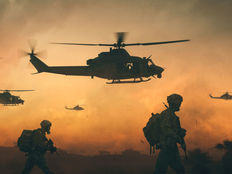 The aerospace and defense sector, along with related exchange traded funds, were among the few pockets of strengthen on Friday after the U.S. airstrike that killed an Iranian general fueled bets of increased military actions to counter retaliatory responses from Tehran.

The defense rally stood out in a down stock market Friday that was fueled by risk-off selling. Investors mostly exited out of stocks following the overnight airstrike while shifting over to gold and U.S. Treasury bonds for the safe-haven hedge and oil in light of increased geopolitical risks in the Middle East.

However, some warned that this short-term risk should not detract from the long-term picture.

“Geopolitical events by their nature are unpredictable, but previous periods of increased tensions suggest that the impact on wider markets tends to be short-lived, with more lasting effects confined to local markets and assets that are directly impacted by the tensions,” Mark Haefele, global chief investment officer at UBS’s wealth-management arm, told the WSJ.

XAR seeks to provide investment results that correspond generally to the total return performance of the S&P Aerospace & Defense Select Industry Index, which represents the aerospace and defense segment of the S&P Total Market Index.

ITA seeks to track the investment results of the Dow Jones U.S. Select Aerospace & Defense Index composed of U.S. equities in the aerospace and defense sector. Aerospace companies in the index include manufacturers, assemblers and distributors of aircraft and aircraft parts.