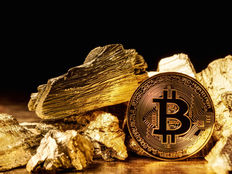 Bitcoin’s status as digital gold may not have held up well during the height of the March sell-offs in equities, but it’s starting to make a rally that’s outdoing its more tangible precious metal counterpart—gold.

Last week, Bitcoin was up as much as 12%, rising above the $10,000 mark before retreating over the weekend. However, with “the halving” event set for later this month, Bitcoin bulls are expecting more gains ahead.

“Bitcoin and gold have now returned to their pre-crash valuations, but Bitcoin’s more dramatic swing means that anyone who bought the dip in March—when Bitcoin was at its lowest—would’ve seen more than a 100% return by now,” a Decrypt report noted.

If Bitcoin isn’t an option for investors, then they can still turn to gold exposure via exchange-traded funds (ETFs) like the popular SPDR Gold Shares (GLD A-) and the more cost-effective SPDR Gold MiniShares (GLDM). Precious metals like gold offer investors an alternative to diversify their holdings, and like other commodities, gold will march to the beat of its own drum compared to the broader market.

In addition to GLD and GLDM, here are a pair of other gold funds to look at: