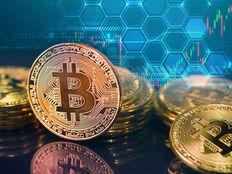 Bitcoin has been dubbed “digital gold” by cryptocurrency and capital markets alike, but the leading digital coin was deemed as an alternative to the precious metal by Federal Reserve Chairman Jerome Powell. Furthermore, Powell likened gold to Bitcoin as a speculative form of value.

Additionally, the Fed chair was quick to dismiss digital currency as an alternative form of payment.

“Almost no one uses bitcoin for payments, they use it more as an alternative to gold,” Powell said. “It’s a speculative store of value.”

Powell said after his testimony to Congress recently that cryptocurrencies, Facebook’s Libra project in particular, is a cause for concern.

“Libra raises serious concerns regarding privacy, money laundering, consumer protection, financial stability,” Powell said at a congressional committee Wednesday. “These are concerns that should be thoroughly and publicly addressed.”

The latest comments by the Fed chair come after French Finance Minister Bruno Le Maire said during a radio interview that Facebook’s latest foray into digital currencies “must not happen.”

Le Maire further said it was “out of the question” that Facebook’s cryptocurrency would eventually become a “sovereign currency.” The Group of Seven (G-7) collective that includes France, the U.K. and U.S. is looking to set up a forum that will delve deeper into the risks of digital currencies and their impact on the current financial system under fiat currency.

The Facebook cryptocurrency news is setting the space abuzz with optimism as Bitcoin reached a high of $20,000 near the end of 2017 and fell over 70 percent since, but is climbing back to prominence again following this news. Despite pressure from governmental regulators for privacy issues, analysts are expecting this cryptocurrency offering will bolster Facebook’s profile.

Meanwhile, gold could reach a peak of $1,440 by year’s end, according to Westpac senior economist Justin Smirk.