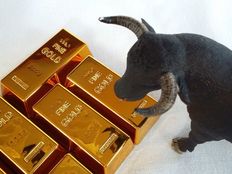 “Gold, for most parts, is steady as we are on hold until we get to the Fed meeting. A lot of the move up (in the last week) formed a consolidation pattern,” Edward Moya, a senior market analyst at OANDA said.

“Most people feel there is going to be a 25 basis point cut, but there is a growing camp that believes we could see a net 50 basis-point cut, which means uncertainty is high and it is going to be difficult to see gold break out until past that event.”

The market expectation of future rate cuts by the Federal saw gold surpass its 5-year high after the central bank said it “will act as appropriate to sustain” economic expansion. Gold prices took a breather by falling below the $1,400 price level, but it could be the precursor to more gains ahead.

A data-fueled Fed will no doubt take into account the latest economic data, such as the latest jobs report from the Commerce Department as an indicator on the health of the economy. Earlier this month, the Labor Department revealed that only 75,000 jobs were created in May, which fell below expectations and could be a sign that the U.S. economy could be on the verge of a slowdown.

Now that a U.S.-China trade deal is left in limbo, it leaves investors looking for the next trigger event to save the markets. With the central bank keeping rates steady thus far in 2019, the next move investors are hoping for is a rate cut, especially if the Fed is sensing a slowdown given the latest economic data.

That should give gold ETFs a boost through the rest of the year until a cut actually happens. It should also give silver investors something to cheer about, including leveraged-fueled traders.

“After rising from below $15 to over $16.50 in just two and a half weeks, we would not be surprised if some market participants were to take profits, thereby prompting a price correction,” Commerzbank analysts said in a note.