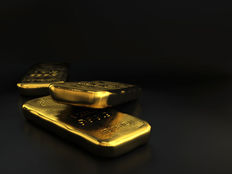 Safe haven assets couldn’t hide from losses as a risk-on switch got flipped back on after positive news from a U.S.-China trade deal fueled a hunger for more equities. As such, precious metals like gold and silver touched down to three-month lows.

“Safe-haven gold and silver prices are sharply down and have slumped to three-month lows in midday trading Thursday,” wrote Jim Wyckoff of Kitco News. “The precious metals bulls continue to be hamstrung by rallying world stock markets that saw the U.S. indexes score record highs again today. Some chart-based sellers also stepped into the futures markets on the sell side today, as serious near-term technical damage has now been inflicted in gold And silver markets. December gold futures were last down $28.30 an ounce at 1,464.80. December Comex silver prices were last down $0.0578 at $17.025 an ounce.”

It wasn’t just U.S. equities feeding off the optimism as other markets around the globe responded to the upside.

“Asian and European stock indexes were also mostly up Thursday,” Wyckoff added. “Trader and investor risk appetite remains elevated as the news from the U.S.-China trade front remains very upbeat. Reports from China Thursday said both countries have agreed to remove their tariffs in tranches. The report said tariffs would be eliminated once the “Phase 1” partial trade deal is signed. There has been no official word from the U.S. on this development. While it is positive, the trade deal still has to be signed. And remember, the trade negotiations between the world’s two largest economies have been a continuously up-and-down affair regarding progress. Given this history, it seems unlikely both nations will now just cruise to the finish line with a trade deal.”

Traders looking to buy the dip can look at the Direxion Daily Gold Miners Bull 3X ETF (NUGT C+), which makes a play on gold miners. NUGT seeks daily investment results, before fees and expenses, of either 300%, or 300% of the inverse (or opposite), of the performance of the NYSE Arca Gold Miners Index.

The index is a modified market capitalization-weighted index comprised of publicly traded companies that operate globally in both developed and emerging markets, and are involved primarily in mining for gold and, to a lesser extent, in mining for silver. The Index will limit the weight of companies whose revenues are more significantly exposed to silver mining to less than 20% of the Index at each rebalance date.