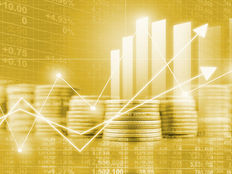 The October reading reached 51.5, which was up from September’s reading of 51.1 to beat economists’ expectations of 50.7. Gold traded just above $1,500 per ounce as it awaits next week’s Federal Reserve meeting where the capital markets are expecting another rate cut.

“Despite business activity lifting from recent lows, the survey data point to annualized GDP growth of just under 1.5% at the start of the fourth quarter, and a near-stalling of new order growth to the lowest for a decade suggests that risks are tilted toward growth remaining below trend in coming months,” said Chris Williamson, Chief Business Economist at IHS Markit.

While the data was better than expected, Williamson did cite weakness in future growth as a possibility.

““If manufacturing can continue to gain momentum this should hopefully feed through to stronger jobs growth and an improved service sector performance, leading to better GDP growth, but it remains too early to determine whether the economy has truly turned a corner,” he added.

As rates in the U.S. have been falling and as the trade war with China rages on, more investors have been piling into alternative safe haven assets like gold. As China’s economy starts to see tangible effects stemming from the trade war, more gold buying could be ahead—trade deal or no trade deal.

Bulls or bears can take advantage of leveraged or non-leveraged funds in precious metals. Investors looking to invest in precious metals ETFs could try the *SPDR Gold MiniShares (GLDM)* and *SPDR Gold Shares (GLD A-) as a great way to play the market, while silver bulls could try the iShares Silver Trust (SLV C+)* and the *Aberdeen Standard Physical Silver Shares ETF (SIVR B)*, two of the largest exchange traded funds backed by holdings of physical silver.

“We are likely to see some digestion in gold prices in the near term but as long as there is elevated demand for safe havens—keeping a lid on yields, gold should be able to drift back up towards $1,520,” said Tyler Richey, co-editor at Sevens Report Research.