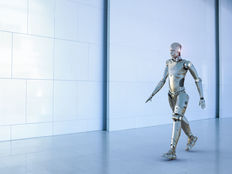 What’s worse than bumping into your co-worker with coffee-in-hand? Maybe bumping into a roaming robot, but Google and the University of California, Berkely researchers are using artificial intelligence to help avoid this embarrassing scenario.

Per a Venture Beat article, “autonomous robot navigation has the potential to enable many critical robot applications, from service robots that deliver food and medicine to logistical and search robots for rescue missions. In these applications, it’s imperative for robots to work safely among humans and to adjust their movements based on observed human behavior. For example, if a person is turning left, the robot should pass the human to the right to avoid cutting them off, and when a person is moving in the same direction as the robot, the robot should maintain a safe distance between itself and the person.”

Advancements in artificial technology will, in turn, help advance the robotics industry in tow.

The trend towards robotics technology looks favorable, and it would serve traders best to capitalize on this move to robotics with ETFs like the Robotics & AI Bull 3X ETF (UBOT).

Traders looking to capitalize on the move to robotics can use UBOT as a tool. UBOT seeks daily investment results equal to 300 percent of the daily performance of the Indxx Global Robotics and Artificial Intelligence Thematic Index, which is designed to provide exposure to exchange-listed companies in developed markets that are expected to benefit from the adoption and utilization of robotics and/or artificial intelligence.