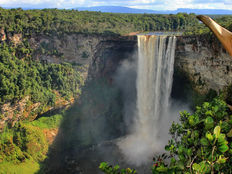 Guyana sits alongside South America’s North Atlantic coast and this small country, which is just about the same size as the state of Idaho, recently joined the ranks of oil producing nations.

“Guyana officially joined the ranks of oil producing nations, after ExxonMobil and its partners began oil production offshore the South American country,” an OilPrice.com report noted. “ExxonMobil and its partner Hess Corporation launched oil production from the Liza field offshore Guyana ahead of schedule and less than five years after the first discovery of oil," the U.S. supermajor said a in a statement.

According to the report, the first cargo of oil from Guyana will be sold within the next several weeks. Additionally, production from “Liza Phase 1” will be expected to reach a full capacity of 120,000 barrels of oil per day within the coming months.

“This historic milestone to start oil production safely and on schedule demonstrates ExxonMobil’s commitment to quality and leadership in project execution,” said Darren Woods, chairman and chief executive officer of Exxon Mobil Corporation. “We are proud of our work with the Guyanese people and government to realize our shared long-term vision of responsible resource development that maximizes benefits for all.”

“Through our continued workforce development and community investments, we are making a positive impact in Guyana,” said Rod Henson, president of ExxonMobil’s Guyana affiliate. “We are committed to the use of technology and continued innovation to achieve the highest standards for safety and environmental performance.”