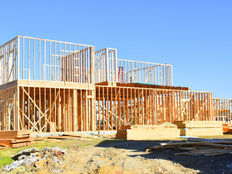 Is a Homebuilder Breakout on the Horizon?

Homebuilder exchange-traded funds (ETFs) could be on the verge of a breakout. As such, ETFs to watch moving forward include the the iShares US Home Construction ETF (ITB A-) and SPDR S&P Homebuilders ETF (XHB A+).

Speaking of ITB, the fund is up 7 percent within the past month, which constitutes its highest level since April 2018. While the S&P 500 has succumbed to the trade war and yield curve inversion volatility, homebuilder stocks have been heading towards the upside with possibly more to come.

From a technical perspective, things are also looking on the up and up.

There is “a really nice technical pattern here, sort of an inverse head and shoulders. … We’re through just at about $48. It’s a pretty good jumping off point to see if we can get those highs,” said Tradinganalysis.com founder Todd Gordon.

“Let’s look at the 10-year yield. … We’ve broken below the 2% level, making new lows there, which is driving housing. The one thing I would say is [there is]a little bit of divergence. You have the ITB not yet at those old highs, so we are playing a little bit of a catch-up here. I think yields need to continue to drop to see buying in housing,” Gordon said.

Leveraged plays on home builder stocks include the bullish Direxion Daily Homebuilders and Supplies Bull and Bear 3X Shares (NAIL ), which attempts to deliver triple the daily returns of the Dow Jones U.S. Select Home Construction Index.
Lower mortgage rates could continue to give the housing market a much needed boost, which could translate to more strength for homebuilders. Rising rates, low affordability and rising homebuilder costs due to tariffs have been thorns in the side for the housing market.

“We still like housing. Interest rates are going lower, the consumer is still strong, and again, we’re not in this recession camp,” said Quint Tatro, founder and president of Joule Financial.

“We like to pinpoint valuation, so look at MDC Holdings. The company has a 3% dividend, $7 per share in cash, very attractive balance sheet, but its selling 10x forward earnings and growing next year’s earnings at 20%, so again, I think we steer away from some of the bigger names, look regionally, and we like MDC Holdings here.” Tatro said.