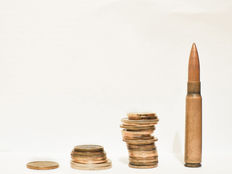 With a new president comes potential changes, particularly when it comes to spending taxpayers’ money. One of those budgetary decisions will involve defense spending, which could either help or hurt funds like the Direxion Daily Aerospace & Defense 3X Shares ETF (DFEN).

Since the pandemic hit, the fund has been relatively staid in terms of movement, but has started to tick higher as of late since the election. With a Joe Biden administration imminent in the White House, traders could be lining up their bets in anticipation the new President’s plans for defense spending.

What Can Traders Expect?

“Biden’s election as the next commander-in-chief will usher in a middle-of-the-road approach to defense policy that draws on priorities from both the Barack Obama and Trump administrations, observers said,” an Air Force Magazine article noted. “Budget austerity was slated to plague either potential winner over the next four years. The U.S. defense budget was entering a period of little or no growth even before the coronavirus pandemic began, despite officials pushing for a 3-5 percent bump each year.”

“Lawrence Korb, a senior fellow at the Center for American Progress, expects Democrats won’t try to take a large bite out of defense spending,” the article added. “Republicans who fear vast underfunding for the military should remember that Obama requested more for the Defense Department in his first budget as President than Trump did in his own first request, he said.”

“Even under Trump, they have projected flat budgets for the next couple years,” said Korb, who served as assistant secretary of defense for manpower, reserve affairs, installations, and logistics in the Ronald Reagan administration. “Biden has never been part of the Sanders wing of the party or Warren wing [with big cuts]. I think it’ll be pretty much the same.”