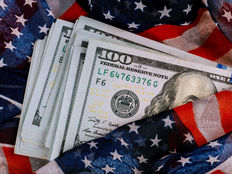 As U.S. President Donald Trump turns his attention to Mexico from China in the latest tariff-for-tariff battles, investors are clamoring for more cash in the form of U.S. dollars rather than traditional safe-havens like gold.

Other geopolitical risks outside the U.S. in addition to the trade spats, however, should keep gold prices in check, according to some analysts.

“The on-going trade war between the US and China, in addition to political developments across Europe should see the metal remain firm,” said Swiss refining and finance group MKS Pamp.

“[But] at the moment,” says a column at the Financial Times, “the [US Dollar] — and not bullion — is seen as the best place to warehouse cash as the trade war between the US and China escalates.”

What could spur a gold rally is a trigger event like a rate cut by the central bank.

The Federal Reserve has been on cruise control thus far in 2019 with respect to interest rate policy, opting to keep the federal funds rate untouched. However, the bond markets are screaming for a rate cut, according to Sevens Report Research.

The bond markets threw a curve ball at fixed income investors earlier this year with an inverted yield curve, sending the capital markets overall on another volatile ride–something they may or may not have been accustomed to during the fourth quarter of 2018. The short-term 3-month and longer-term 10-year yield curve inverted–an event that hasn’t been seen since 2007–just ahead of the financial crisis.

The spread between the 3-month and 10-year notes fell below 10 basis points for the first time in over a decade. This strong recession indicator contrasted a more upbeat central bank, but the bond markets are saying otherwise.

“There can be no clearer message than that to the Fed: Rates are too high,” according to Sevens Report Research. “This is the bond market’s equivalent of a bullhorn screaming it in Powell’s face.”

Furthermore, Sevens Report Research delved into exactly why this inverted yield curve phenomenon exists and why it matters to the bond markets in the first place.

“Understanding why yield curves invert is often over complicated,” they noted. “Here’s why yield curves invert: Investors fear the future so much, that return of capital becomes more important than return on capital. More specifically, bond investors become so concerned about future economic growth and inflation, that they simply want the best guaranteed return they can get. So, they sell out of lower-yielding, shorter-dated Treasury maturities (which causes those yields to go up) and those investors pile into the longest-dated Treasuries (which pushes those yields lower) for the max yield in a safe investment.”