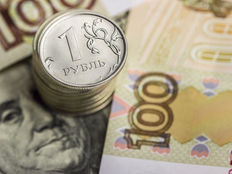 Lever Up in Russia with the RUSL ETF

With major U.S. indexes fluxing up and down with volatility, more ETF investors are moving into international markets. Short-term traders looking to capture upside in this recent market shift can double down in Russia with the Direxion Daily Russia Bull 2X ETF (RUSL B-).

“Exchange-traded funds with exposure to Russian assets gained Friday (March 5) as investors looked for ways to play the boom in energy prices,” a MarketWatch article reported. “The VanEck Vectors Russia ETF gained 3% mid-morning, while the iShares MSCI Russia ETF was up 2.9%.”

RUSL seeks daily investment results that equal 200% of the daily performance of the MVIS Russia Index. The index is intended to represent the overall performance of publicly traded companies that are domiciled and primarily listed on an exchange in Russia or that are not Russian companies, but nonetheless generate at least 50% of their revenues in Russia.

Thus far this year, RUSL is up 9%. It’s handily outpacing the broader MSCI Russia index by over 8%.

Oil Will Be a Major Driver for Russia

As an OPEC ally, oil will continue to be a major driver for Russia, which recently secured an increase in its oil output quota. The Bloomberg Gas Oil Subindex is up 29% for the year, riding the recent rally in energy and in particular, a rise in oil prices.

“In early 2021 Russia secured an increase to its oil output quota under the OPEC+ agreement for February and March, the latest sign that Russia’s comparatively strong economic position is allowing it to push for better terms under the deal,” an S&P Global article noted. “Economics are set to underpin future negotiations in 2021, with Russia likely to continue to push to increase output volumes, despite uncertainty over demand.”

Should oil prices get shook up once again, Russia is in a decent position to mute the downturn given its strong economic position.

“Russia is better able to absorb oil shocks than many of its OPEC+ allies, primarily because of its flexible exchange rate to the US dollar, the currency used to price its crude,” the article said further. “The ruble’s value tends to fall against the US dollar when oil prices drop. This allows Russian producers, whose costs are primarily in rubles, to minimize the impact of low prices on their operations.”