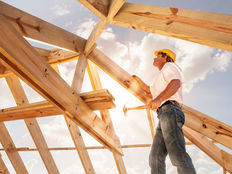 Someone forgot to tell the Direxion Daily Homebuilders and Supplies Bull and Bear 3X Shares (NAIL ) ETF that trade wars are racking markets. Thus far this year, NAIL is up a whopping 93.54 percent and is looking to build more gains in the future if the housing market happens to stay immune from the trade war news.

That will be a challenge, according to Rob Dietz, chief economist at the National Association of Home Builders. With trade wars lingering, this could put a damper on consumer confidence and in turn, affect the purchase of homes.

“Consumer confidence appears to be weaker than recognized, particularly with respect to large ticket purchases like housing or remodeling,” said Dietz.

The effects of a trade war won’t only have lingering affects on housing, but the overall economy.

“Clearly, a trade war increases this uncertainty,” said Dietz. “We estimate that the 25% rate on the existing set of tariffs represent a $2.5 billion annual tax increase for the housing sector in terms of materials used for construction. A trade war will also hurt sectors of the economy, like agriculture, and increase overall consumer wariness.”

Still, there is cause for optimism after the National Association of Home Builders/Wells Fargo Housing Market Index rose a point during the month of April.

The index, a measure of homebuilder confidence, gained last month as industry experts cited strong demand in the spring. Compared to a year ago, however, the index is still down five points.

If the trend mirrors last year when the index hit a high of 70 in the month of May, homebuilder ETFs could see an uptick.

Last month, the central bank decided to keep interest rates unchanged. In move that was widely anticipated by most market experts, the Federal Reserve elected to keep rates unchanged, holding its policy rate in a range between 2.25 percent and 2.5 percent. In addition, the central bank alluded to no more rate hikes for the rest of 2019 after initially forecasting two.

“Ongoing job growth, favorable demographics and a low-interest rate environment will help to modestly spark sales growth in the near term,” said Dietz. “However, supply-side headwinds that are putting upward pressure on housing costs will limit more robust growth in the housing market.”