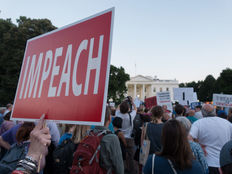 After struggling to reach new highs once again Wednesday, markets are pulling back some Thursday morning, amidst impeachment hearings and fallout from the Fed, as Fed Chair Jerome Powell testifies before the US house again today.

Hoping stocks will continue their ascension through 2020 and beyond, President Donald Trump has long been critical of the Fed and its approach to monetary policy, stating at The Economic Club Of New York on Tuesday, “If we had a Fed that worked with us, we could have added another 25% to those numbers,” referring to potential gains to major stock benchmarks.

The Fed chair stated that the market is in a steady if insipid domain, where slow, continued growth is likely. He does not see a recession in the future, but does not see the dramatic growth the president is championing either.

“If you look at today’s economy, there’s nothing that’s really booming that would want to bust in other words. It’s a pretty sustainable picture. I pointed out that the risks, and those are in manufacturing. Manufacturing is declining, but not sharply. Manufacturing is more sensitive to economic cycles, so it does decline,” Powell said in testimony.

Powell emphasized that one factor which could damage the economy is the ongoing trade war with China.

Referring to the tariffs Powell said, “Some of the ones that are proposed, it just gets larger and larger and haven’t been put into affect yet. If you put them all into effect that would have a bigger effect on the overall economy. Remember trade policy uncertainty itself is a separate channel through which Trade does affect the economy.”

The president also mentioned international relations during the speech at the Economic Club Of New York, but refrained from making any rigid declarations about the outlook for the current phase of talks between major players like China. Trump, however, did note again that Beijing was “dying to make a deal.” But the president provided no details on when or if tariffs would be removed nor did he provide a location or time-frame for a meeting to sign a deal with Chinese President Xi Jinping.