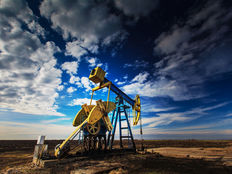 Oil would like to file 2020 away as quickly as possible, but with Q4 still left to go, is there upside ahead? Per a recent article in OilPrice.com, that may not be the case as Russia looks to scale back on its drilling.

“Russian oil producers who have already reduced their drilling activity by a third this year may cut it further by 20 percent, according to the chief executive of a major oilfield service provider,” the article said.

“The year 2021 doesn’t look too good,” Vitaly Dokunikhin told Bloomberg in an interview. “Amid expectations of a suppressed demand, very specific discussions are ongoing about reductions.”

In addition, the article stated that a “further cut in new drilling suggests that Russia’s oil companies are particularly hopeful for a quick rebound in demand for the commodity, despite Energy Minister Alexander Novak recently saying that he expected demand to recover to pre-pandemic levels by the second quarter of next year.”

“Reserves accumulated in the second quarter are gradually shrinking, and we see that July and August were the first two months when stocks declined gradually. The reduction roughly amounted to 45 mln barrels in August and 34 [mln barrels] in July,” Novak said in September.

Traders who feel ready to pounce can use funds like the United States Oil Fund, LP (USO A). Additionally, those looking to lever up their trades can use the Direxion Daily S&P Oil & Gas Exp. & Prod. Bull 2X Shares (GUSH ).

GUSH seeks daily investment results, of 200% of the daily performance of the S&P Oil & Gas Exploration & Production Select Industry Index. The fund, under normal circumstances, invests at least 80% of its net assets (plus borrowing for investment purposes) in financial instruments and securities of the index, ETFs that track the index and other financial instruments that provide daily leveraged exposure to the index or ETFs that track the index. The index is designed to measure the performance of a sub-industry or group of sub-industries determined based on the Global Industry Classification Standards.