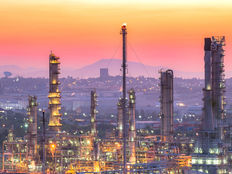 After a dramatic 20% ramp up in crude oil prices on Monday following the drone attack on Saudi Arabian oil, the market fell back handily, dropping 5.48% in the Brent crude contract, and 5.45% in the WTI contract on news that production had been restored significantly.

The prior session was the biggest surge oil had seen since 2008, following drone strikes on a Saudi oil facility at Abqaiq and at a nearby Khurais oil field on Saturday, hamstringing 5.7 million barrels of daily crude production or 50% of the kingdom’s oil output. Saudi Aramco, the national oil company, was attempting to restore about one third of its crude output, or 2 million barrels by Monday, amidst plans to release its IPO. However, Bloomberg News reported it could take weeks before Aramco restores the bulk of its production at Abqaiq.

Rather than the projected longer time-frame, Saudi instead is now already close to restoring 70% of the production lost due to the attacks, Reuters reported. In contrast to the heightened fears first implied, the impact on Saudi oil exports has been “minimal” following the attack because of ample storage, according to Reuters.

This type of hyperbolic reaction has been infecting the market forever, most recently with the daily vacillations and heightened emotional content related to the U.S.-China trade war, where investors scramble to find the right market play based on hasty social media reactions.

However, the prospect of a war with Iran could be a more significant and real threat to oil and the globe, according to experts.

“Geopolitical events have a historic tendency of exaggerated initial impact in markets, with a smaller economic and market impact emerging over a short period of time,” Steven Wieting, Citi’s chief investment strategist, said in a note. “The degree of any escalation with Iran is the more critical issue for longer-lasting supply risks. Temporary disruptions for repairs inside Saudi are very different.”

The Saudi Ministry of Foreign Affairs claimed that preliminary investigations show that the weapons used in the attack were from Iranian. “Investigations are still ongoing to determine the source of the attack,” the group said.

“Going forward, the main driver of prices will be time, specifically how long the Saudi production facilities will be offline,” Tom Essaye, founder of Sevens Report, said in a note on Tuesday.

Whether or not the attack has a longer-term impact on the market remains to be seen. However, the event may have catalyzed a possible shift in trend, according to experts.

“While in the short term the direct physical impact on the market might be limited, this should move the market away from its bearish macroeconomic cycle and raise the risk premium in the market as funds reduce their short positions,” said Chris Midgley, global head of analytics, S&P Global Platts.

Investors looking to capitalize on continued bullishness in crude oil could look into ETFs like the United States Oil Fund (USO A), the VelocityShares 3x Long Crude Oil ETN (UWT), and the ProShares Ultra Bloomberg Crude Oil (UCO A).