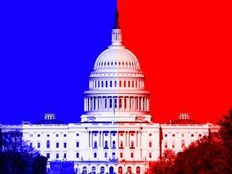 Elections could be a trigger point for investors to pour money back into stocks, and with midterm elections on the minds of investors, this means the S&P 500 could finally see a sustained rally after a rough 2022.

Inflation fears on the minds of investors have been feeding into broad market weakness, as evident in the S&P 500’s performance this year. The index is down over 20% year-to-date as investors fret over whether a recession could be on the horizon thanks to rising interest rates.

In the background is the battle for Congress as midterm elections wind down. History shows that bipartisanship can be a catalyst for strength in stocks, which is what the S&P 500 could use heading into the final months of 2022.

“Still, divided government — by far the most likely outcome as final votes are tallied — is usually good news for stocks,” an Investor’s Business Daily article said. “And it’s unclear whether a more strident GOP, emboldened by a takeover of both the House and Senate, would be more favorable for the S&P 500 than a split Congress.”

The article also noted that LPL Financial strategists Barry Gilbert and Jeffrey Buchbinder acknowledged that a mixed Congress could bode well for the markets.

“Markets tend to like a Democratic president and GOP or mixed Congress, they write,” the IBD article noted further. “Since 1951, that combination has yielded S&P 500 annual returns of 17% vs. the average 12%.”

Common sense says that a mixed Congress will typically mean that less will be done in terms of getting legislation passed. While the bureaucratic red tape argument can hold up, history shows that now could be a good time for the stock market to rally.

“Strategist Ed Yardeni of Yardeni Research writes that the third and fourth years of a presidential term also tend to be good ones for stocks, with an average S&P 500 gain of 13.5% and 7.4%, respectively, dating back to FDR,” the IBD article said further, noting that past performance, however, isn’t an impetus for continued performance, so investors should tread lightly on this data.

Nonetheless, it gives traders fodder to take into account when assuming that bullishness could take place in the S&P. If so, traders can play to the upside with the Direxion Daily S&P 500® Bull 3X Shares ETF (SPXL B+), which seeks daily investment results equal to 300% of the daily performance of the S&P 500 Index.

To profit on the downside in the short term, traders can use the Direxion Daily S&P 500 Bear 3X ETF (SPXS B+). Both ETFs offer thrice the leverage, so only seasoned traders should use these products.