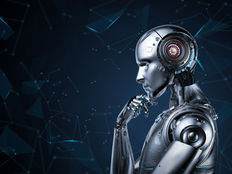 The Robots Are Coming via The ‘UBOT’ ETF

Over 240 years ago, Paul Revere made his legendary midnight ride to warn his fellow compatriots that the British troops were armed and headed their way. Now more than ever, several industries are warning that the robots are coming, and investors can capitalize on this revolutionary movement via the Direxion Daily Robotics, Artificial Intelligence & Automation Index Bull 3X Shares (UBOT).

UBOT seeks daily investment results equal to 300 percent of the daily performance of the Indxx Global Robotics and Artificial Intelligence Thematic Index, which is designed to provide exposure to exchange-listed companies in developed markets that are expected to benefit from the adoption and utilization of robotics and/or artificial intelligence.

For investors who missed out on the serendipitous run of FAANG (Facebook, Amazon, Apple, Netflix, Google) stocks, they can look to capitalize on disruptive tech options of the future.

“You have robotics, you have medical robots that do surgeries, you have AI in factories, you have an aging population being replaced by robots–I just think that space is going to be huge,” Jablonski added.

Amid a wall of worry that includes a dovish Federal Reserve and slowing global growth, UBOT has been providing astounding returns–up 98.25 percent year-to-date according to Morningstar performance figures.

In early 2018, technology mogul Elon Musk, founder of SpaceX and co-founder of Tesla, sat down with the Artificial Intelligence Channel to discuss his thoughts on AI as it relates to his neurotechnology company Neuralink. Musk wryly responded to the notion that a lot of experts in the AI space do not share his views on the subject.

Some of the areas seeing explosive growth with a move towards robotics and mechanization is health care.

“One of the most dramatic areas of mechanization is in healthcare,” a Direxion blog noted. “Unexpectedly, this is represented in the index by its second-largest component, Intuitive Surgical, Inc., which builds the leading robotic surgical system and has a global install base of 4,271 units. Japanese medical device maker Omron Corporation represents 5.16% of the index, although their products are primarily operational and extend beyond medicine, producing equipment and electrical systems related to everything from patient care to system automation for prisons.”