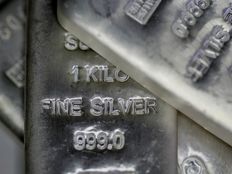 Silver Prices Down, But a Rally Could Be Brewing

With the strong showing in equities as of late, it seems that precious metals like silver have fallen to the wayside when it comes to capital allocations, but technical levels show that a rally could be brewing for silver bulls.

“In particular, we’re going to discuss the SLV ETF,” a Commodity Trade Mantra article by Przemyslaw Radomski, CFA noted. “This ETF has one big advantage over silver futures chart that we feature regularly. It puts emphasis on price gaps and shows only that trading which took place when the U.S. market was open. This distinction can be helpful in determining support and resistance levels as price gaps tend to provide such. In fact, the late-September bottom formed once silver touched the upper border of its price gap.”

“The SLV was attempting to break below the lower border of the gap and it has failed to do so three times,” Radmomski said. “This serves as an indication that silver prices are not yet ready to break lower. The price gap on its own would not be strong enough to make the short-term silver outlook bullish all by itself, but that’s not the only thing that’s pointing to higher silver prices in the near term.”

“The silver seasonality also suggests that the short-term decline in the white metal might be over or close to being over as local bottoms tend to form close to the middle of November,” added Radomski. “What does it all come to? It means that – as far as the next week or two are concerned – the outlook for silver prices just became bullish.”

USLV seeks to replicate, net of expenses, three times the S&P GSCI Silver index ER. The index comprises futures contracts on a single commodity. The fluctuations in the values of it are intended generally to correlate with changes in the price of silver in global markets.

AGQ seeks daily investment results that correspond to two times (2x) the daily performance of the Bloomberg Silver SubindexSM. The fund seeks to meet its investment objective by investing, under normal market conditions, in any one of, or combinations of, Financial Instruments (including swap agreements, futures contracts and forward contracts) based on the benchmark. The types and mix of Financial Instruments in which the fund invest may vary daily at the discretion of the Sponsor.