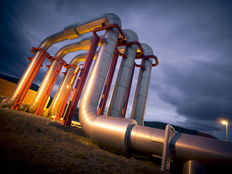 Crude oil prices are dropping today after the EIA released inventory data on Wednesday, showing that there was a massive build in crude. To compound matters, oil prices were nearly 2% lower on Thursday after a leak on a key U.S. pipeline disrupted supply flows and on data showing weak factory activity in China.

The Energy Information Administration (EIA) reported an incredible 5.7-million-barrel oil build, which sent the recent oil market bulls scrambling for safety. Bears were further emboldened by the report showing 698,000-barrel released from the Strategic Petroleum Reserve as well as a 700,000 barrel a day upward adjustment. This information continues to come as a surprise to oil investors and traders.

Analyst Phil Flynn sees this drop as mysterious but not surprising.

“These upward adjustments of ghostly barrels continue to defy explanation, from the EIA, and strikes terror in oil traders and analysts that can actually do the math. They put their faith in U.S. production that is stuck at 12.6 million barrels a day for months and act like zombies that fail to question why that number hasn’t changed in a month while there are clear signs of production problems in the U.S. shale patch. Despite near-record demand in the U.S. and a Federal Reserve that is so scared of low inflation that they have told you that they will not raise rates until they see inflation rise sustainably, based off a question by Fox Business Networks, Edward Lawrence, or until hell freezes over,” Flynn said in a written report to investors.

Technical factors could also be at work in driving down crude oil price, according to some analysts.

For investors looking to ride the downside of the oil market, ETFs such as ProShares Ultra Bloomberg Crude Oil (SCO A+), DB Crude Oil Double Short ETN (DTO A), ProShares UltraPro 3x Short Crude Oil ETF (OILD ) enable investors to satisfy their short bias. However, ETFs like SCO are intended as a short-term tactical investment to be held only for a one-day exposure period. These are not the best choice for buy-and-hold investors.