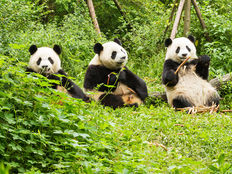 The who’s who of technology were nowhere to be found at one of the biggest stages when it comes to China internet tech as Google, Facebook and Apple were no-shows amid the U.S.-China trade war, which features key issues like tech.

“Many big technology names from the United States stayed away but some smaller American firms showed up for China’s main internet conference at the weekend, as the trade war between Beijing and Washington continues to expand into a technology conflict,” an article in the South China Morning Post said. “The state-run World Internet Conference, also known as the Wuzhen Summit, has been held in the canal town near Shanghai since 2014 as a platform for the Chinese government to promote its idea of global internet governance and export its own highly restricted internet model to other countries.”

Trade wars have been a major market mover for Chinese equities and if investors can look past the news headlines to zero in on value, China-focused ETFs like the *Direxion Daily CSI China Internet Index Bull 2X Shares CWEB* could be a double-down play as the shift from U.S. equities becomes more apparent heading deeper into the late market cycle.

CWEB seeks the daily investment results equal to 200% of the daily performance of the CSI Overseas China Internet Index. The fund is comprised of assets that track the index and other financial instruments providing daily leveraged exposure to the index or ETFs that track the index, which is designed to measure the performance of the investable universe of publicly traded China-based companies whose primary business or businesses are in the Internet and Internet-related sectors.

By cornering a specific area of the technology sector, the internet, CWEB can capitalize on an industry that continues to see increased investor interest. Investors who don’t want to take on the extra leverage can also look to other China tech-focused ETFs.