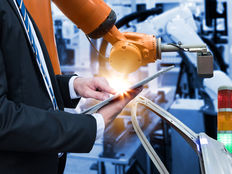 Perhaps no sector epitomizes the stock market’s resilience in the face of the coronavirus pandemic quite like industrials. Despite the pain felt by this industry early in the pandemic, investors have been seemingly eager to anticipate the prospect of a rebound in everything from blue-chip industrial names, to massive defense contractors, to the much-maligned airliners (a potential $1 trillion infrastructure spending bill out of Washington has surely helped sentiment).

This enthusiasm has helped to bolster three Direxion Daily Leveraged ETFs with heavy exposure to various components of the industrial sector.

Big Bounce Back for DUSL

Since reaching a recent low of around $9.40 back in mid-May, the Direxion Daily Industrials Bull 3X Shares ETF (DUSL) has bounced back more than 75% over the intervening four weeks. This despite a volatile June that pushed the fund, which aims to deliver 300% the daily performance of S&P’s Industrials Select Sector Index (IXITR), close to a three-month high before an early June selloff knocked the entire market lower

In the face of this most recent volatility, as well as the overall volatility of the moment, DUSL has charted a fairly consistent course higher since March thanks to the activity of some of the index’s largest and most prominent components.

This includes industrial stalwarts like Honeywell, which while still red on the year has managed to retain investor confidence thanks to an earnings report early in May that showed the company exceeded bottom-line expectations by generating per-share revenue of $2.10, though it missed slightly in first-quarter sales. However, what likely captured the market’s imagination is the demand the company said it has seen for respiratory and other personal protection equipment during its conference call.

A similar picture is developing for 3M, which also reported a solid quarter and has also been at the center of heightened PPE demand for its manufacture of the N95 mask as well as medical gowns and face shields. And while company CEO has been clear that much uncertainty remains for the coming quarter and the rest of 2020, traders have helped buoy the stock higher by 35% from its 2020 low to within 10% of its 2020 high

The May ISM Manufacturing PMI still shows production demand in a state of contraction, with demand still at 10-year lows, though expectations are for the June reading to rebound to the 45-50 range.

Nowhere is this relationship to the broad industrial sector more closely linked than in the transportation industry. Much like the performance of DUSL over the past month, Direxion’s Daily Transportation Bull 3X Shares (TPOR) has been particularly active since hitting recent lows in May to gain about 60% into the first few weeks of July.

Part of this growth can be chalked up to a strong rebound in airlines following a devastating March that saw many airliners effectively shut down. However, shares of Southwest Airlines and Delta Airlines have rebounded by 35% and 45% respectively while United Airlines and American Airlines have surged between 65-80%.

A rebound in the freight industry has also buoyed the sector. Although industry leaders like Norfolk Southern and Union Pacific were hit hard during the pandemic, they were each able to regain most of the ground than they lost in the sell-off thanks to strong first-quarter earnings results. Trucking companies J.B. Hunt and C.H. Robinson both turned positive for the year in June, and while most companies in the segment have provided a diminished outlook for coming quarters, investors and analysts have remained interested, with analysts at UBS upgrading their rating on Union Pacific to a “Buy” and Wells Fargo analysts increasing their price target on Norfolk Southern by 6%.

The aerospace and defense contractors have had a tough road even before the pandemic. Companies like Boeing, with its well-documented product 737 MAX struggles, and General Dynamics, with its history of middling revenue performance, threw a pall over the high valuations throughout the industry.

However, following the pressure release that the March crash represented, investors have been looking at the defense industry in a new light, which has helped the Direxion Daily Aerospace & Defense Bull 3X Shares ETF (DFEN) gain about 90 percent through May and June.

Boeing, in particular, has reaped the majority benefit of the Spring rebound, driving growth in the Dow Jones U.S. Select Aerospace & Defense Index (DJSASDT), which DFEN tracks. The stock has climbed by nearly 60% from its May lows and is up more than 100% off of the 52-week low it hit back in March as the company has dedicated its efforts toward redesigning and recertifying its infamous 737 Max airliner for commercial flight.

In contrast to Boeing, which still remains well below its recent highs, defense competitor Lockheed Martin has perhaps shown the most resilience of any company in the industry. The stock followed the market lower in March but quickly rebounded through April, helped by a strong first-quarter earnings report. After briefly peaking over the $410 mark at the start of June, about 7% off an all-time high, the stock is just within its 2020 opening price.

Lockheed Martin isn’t alone in this position, smaller contractors like L3Harris and Teledyne have rebounded strongly in the run-up to summer. And while the back half of 2020 will no doubt carry additional challenges and surprises for the industrial sector and the market as a whole, the recent performance of individual components in the manufacturing, transportation and defense segments offer some indication of how well-suited they are in the face of an uncertain economic future.

Short-term performance, in particular, is not a good indication of the fund’s future performance, and an investment should not be made based solely on returns. Because of ongoing market volatility, fund performance may be subject to substantial short-term changes.

Market Disruptions Resulting from COVID-19. The outbreak of COVID-19 has negatively affected the worldwide economy, individual countries, individual companies and the market in general. The future impact of COVID-19 is currently unknown, and it may exacerbate other risks that apply to the Fund.

Direxion Shares Risks –An investment in the ETFs involves risk, including the possible loss of principal. The ETFs are non-diversified and include risks associated with concentration that results from an ETF’s investments in a particular industry or sector which can increase volatility. The use of derivatives such as futures contracts and swaps are subject to market risks that may cause their price to fluctuate over time. The ETFs do not attempt to, and should not be expected to, provide returns which are a multiple of the return of their respective index for periods other than a single day. For other risks including leverage, correlation, daily compounding, market volatility and risks specific to an industry or sector, please read the prospectus.