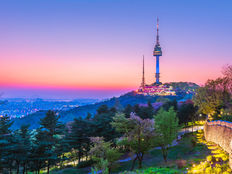 This South Korea ETF Is Starting Early In 2021

Traders sifting through the mass of leveraged ETF opportunities might want to give this single-country fund a look: the Direxion Daily South Korea Bull 3X Shares (KORU ) is up 15% to start the year and more upside could be brewing.

KORU seeks daily investment results, before fees and expenses, of 300% of the daily performance of the MSCI Korea 25/50 Index. The fund invests at least 80% of its net assets (plus borrowing for investment purposes) in financial instruments and securities of the index, ETFs that track the index, and other financial instruments that provide daily leveraged exposure to the index or ETFs that track the index.

The index is designed to measure the performance of the large- and mid-cap segments of the South Korean equity market, covering approximately 85% of the free float-adjusted market capitalization of South Korean issuers. The fund has already surpassed its pre-pandemic levels and then some, rising to an 85% gain the past year.

Is it too late to get in? When applying a relative strength index (RSI) filter into its 3-month chart, KORU is well into overbought levels.

However, adding another technical filter for confirmation like the moving average convergence divergence (MACD) filter shows the exponential moving average (EMA) line above the signal line. This could mean a buying opportunity for traders looking for an area of value.

For additional confirmation, a Bollinger Bands™ indicator shows the price above the upper band, which could also mean a price drop might be ahead. Traders might want to put this on their watch list and look for some profit-taking action that can cause an entry point to develop.

“The ADB expected Asia’s fourth-largest economy to retreat 0.9 percent this year, compared with its September forecast of 1 percent contraction,” a Yonhap News Agency article reported. “The Manila-based bank predicted the Korean economy will grow 3.3 percent next year, the same as its earlier forecast.”

“The ADB said the Korean economy is forecast to contract less than earlier projected in 2020 ‘on stronger information technology exports, some recovery in private consumption, continuing fiscal and monetary support and improved growth in major export markets,’” the article added. “The bank’s outlook is better than the latest forecasts by South Korea’s central bank, the Bank of Korea (BOK), and the Organization for Economic Cooperation and Development (OECD).”