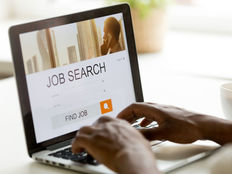 The coronavirus-stricken market is keeping investors on edge for any sliver of news that might be deemed positive or negative. While the world is fixated on news coming out of the World Health Organization or Center for Disease Control, there’s also the economic aspect nobody can forget–this week, it’s the unemployment numbers coming out of the U.S. Department of Labor.

With the number of coronavirus cases rising in the U.S., gold watchers will want to know if the unemployment numbers rise in tow. Unemployment has been at a historical low, but the coronavirus could make a proverbial dent in that armor.

“Yesterday’s weekly initial jobless claims spiked 70,000 or 33% to 281,000, but a much bigger surge is likely next week,” said ING chief international economist James Knightley, with regard to last week’s unemployment figures.

“Assuming we average out at a seven-fold increase in claims versus last week, this would translate into a 2 million rise in jobless claims. By way of comparison, the record high was 695,000 in early October 1982 with the Global Financial Crisis peak being 665,000 in late March 2009,” Knightley added.

Precious metals like gold offer investors an alternative to diversify their holdings. Like other commodities, gold will march to the beat of its own drum compared to the broader market.

Due to this negative correlation, large downturns in the broad market may not affect commodities. By investing in gold ETFs versus physical gold, investors can also reap the benefits of an ETF like its tax efficiency, as liquidity to buy or sell quickly in the markets.

Gold ETFs can be bought and sold freely via an exchange when compared to physical gold. As such, investors can utilize the hedging properties of gold without having to endure the costs of actually owning and storing the asset like they would with physical gold.

Investors looking to get gold exposure can look at funds like *SPDR Gold Shares (GLD A-)  and the SPDR Gold MiniShares (GLDM)*. Precious metals like gold offer investors an alternative to diversify their holdings, and like other commodities, gold will march to the beat of its own drum compared to the broader market.