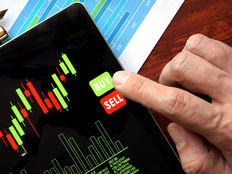 Time for a Trade on Financials, But How?

August is supposed to be the quietest month of the year—the summer doldrums. And yet, this August has proven to be anything but quiet, thanks to corporate earnings and the most highly anticipated FOMC meetings in years.

Volatility was the story through much of the month, spurred by on-again-off-again trade talks between the U.S. and China and an inversion of the 2-year and 10-year treasury yields, a long-running recession indicator. In fact, anxiety about a potential recession ended up overriding a better-than-expected earnings season and sabotaged an interest rate cut that many on Wall Street were previously praying would come.

Given the grim macroeconomic overtones in this confluence of events, the Russell 1000 Financial Services Index experienced its steepest fall since December. As a result, the Direxion Daily Financial Bull 3X Shares ETF (FAS A-) plunged in the midst of the financial volatility.

By that same token, the Direxion Daily Financial Bear 3X Shares ETF (FAZ) received a sizable uptick in interest. Following a spike in fund redemptions as the ETF jumped 15% in the initial trading days of August, FAZ saw net inflow rise by $7.5 million.

Source: Bloomberg. Date: 7/31/2019 – 8/26/2109. RGUSFLA Index: Russell 1000® Financial Services Index. Past performance is not indicative of future results. Investment return and principal value of an investment will fluctuate so that an investor’s shares, when redeemed, may be worth more or less than their original cost. Current performance may be lower or higher than the performance data quoted. For standardized performance and the most recent month-end performance, click here.

In most respects, these moves make sense. The Fed’s decision to cut interest rates not only threatens to cut into lending margins, but the move has also rekindled fears of an upcoming recession, driving up treasuries and souring Wall Street on the idea of going long financials.

However, with August in the rearview, traders might benefit from taking a closer look at exactly where the financial sector stands after the recent sell-off. In fact, in the midst of all the trade war and global recession fears, earnings reports from the big banks revealed an industry still rolling along at a steady pace.

While not a blowout quarter for any of them, major financial institutions, including JPMorgan Chase, Bank of America, Wells Fargo, and Citigroup each posted second-quarter top- and bottom-line results above analyst estimates. Peppered in these reports are clear signs that borrowing and liquidity remain in demand. Overall lending was up on a year-over-year basis by 2-4% for Bank of America, Wells Fargo, and JPMorgan. At the same time, credit card concerns like Visa and Mastercard grew their YoY sales by 11.5% and 12% respectively.

Of course, all of this is little consolation for those convinced a recession is imminent. However, there is one place in particular where that conclusion has not yet been reached: the Federal Reserve.

In contrast to its most recent action on rates, commentary from the Fed was univocal regarding the current stability of the U.S. economy. What’s more, the July edition of the Fed’s Beige Book, which compiles and summarizes economic activity from each of the body’s 12 branches between FOMC meetings, noted that the national financial picture remains mostly unchanged, and that “increased demand for loans was broad-based, with all but two Districts noting some growth in financing activity.” The underlying relative health of financials is still reflected in the overall returns trend for 2019, illustrated in the year-to-date returns for FAS.

Source: Bloomberg. Date: 7/31/2019 – 8/26/2109. RGUSFLA Index: Russell 1000® Financial Services Index. Past performance is not indicative of future results. Investment return and principal value of an investment will fluctuate so that an investor’s shares, when redeemed, may be worth more or less than their original cost. Current performance may be lower or higher than the performance data quoted. For standardized performance and the most recent month-end performance, click here.

Ultimately, the fundamental statistics from the banks and the anecdotal evidence from the Fed only serves to illustrate the current business ecosystem, and can’t account for unexpected shifts in the global economy or market sentiment.

But, with three more meetings planned for 2019 and an undefined course for exactly what the Fed is doing with prevailing rates, big bank investors need to contend with whether the current evidence on the financial sector’s core business strength can weather the equity market’s anxiety around business growth, global trade and whether the next recession is a few months, or years away.

Either way, Direxion has bold trades for bulls and bears.