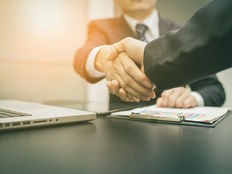 US and China Could Have Different Definitions of ‘Deal’

U.S. markets rallied fiercely last week after President Donald Trump tweeted that “good things” were happening, and that the U.S. had come to a “very substantial phase one deal” with China in the high-stakes trade negotiations between the two economic superpowers, last Friday.

“Phase two will start almost immediately” after the first phase is signed, Trump said in the Oval Office alongside Chinese Vice Premier Liu He.

But shortly after, markets sold off from their highs, with the S&P 500 losing more than 30 points in a matter of minutes. So what gives?

“I think Markets got ahead of themselves. Let’s think of this not as phase 1 but phase 0.5, because the US thinks they’ve made an agreement but China doesn’t necessarily believe the same. And so I think stocks got a little ahead of themselves, but there are always opportunities to to find tech gems out there,” explained Kristina Hooper of Invesco on CNBC.

Where can these so-called tech gems be found?

“Well I have advocated for a while now that Chinese Tech looks very attractive. But that has been down, really since the US China trade wars begin. Certainly it has seen small recoveries over this time frame, but there are a lot of opportunities in Chinese tech,” Hooper said.

With seasonality as a factor, other experts are also concerned about market volatility increasing again if a trade deal fails to come to fruition.

“Well let’s keep in mind, this is October after all, and October is a scary month. Look it’s a scary month, it’s known for Halloween, but it’s also known for major Market selloff‘s. And I got a tell ya, this year for Halloween, I was hoping to dress up as a trade deal with China. But I can’t because I’ve never actually seen a trade deal with China. And I may not see one between now and Halloween. But what investors have seen before is Q4 volatility. And they saw it last year. It’s a scary monster that came out. No one wants to talk about it, but we know it’s out there. If we don’t make a trade deal that’s a real concern. And we’re seeing investor sentiment at its weakest level since mid-2016, said Larry Glazer of Mayflower Advisors on the same CNBC segment.

So what can investors do in the meantime, according to Glazer?

“Manufacturing PMI’s are a little bit soft. We’re seeing a lot of softness, and we’re telling investors don’t trade the trade headlines like the people with algos and robos, instead fade the market leadership on the trade headlines. And instead build a shopping list for year end, opportunistically looking for tax loss selling cases which I’m much more excited about for election season,” said Larry Glazer.

Watch the full CNBC segment ‘Markets got ahead of themselves on trade news’: