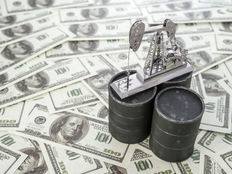 The Energy Information Administration on Wednesday reported that U.S. crude supplies fell by 1.1 million barrels for the week ended Dec. 13, which beat analysts’ expectations polled by S&P Global Platts. However, this latest rise could be masking weakness in oil prices from a macro perspective based on growth.

The latest EIA number comes after analysts forecasted a decrease of 2.5 million barrels, but the American Petroleum Institute on Tuesday reported a 4.7 million-barrel jump. Still, from a year by year perspective, oil prices could be reaching a peak.

“US oil production surged to a record 11.36 million b/d in August 2018, more than a 2.11 million b/d increase from the previous year. Four months later, US oil output would break the 12 million b/d mark for the first time,” a S&P Global report by Brian Scheid noted. “The US Energy Information Administration (EIA) forecasts that US oil output may have broken the 13 million b/d threshold just last month. Largely fueled by continued growth in the Permian, US oil output is expected to continue to shatter records well into 2020. But US crude oil could be feeling some growing pains and, while more records will be broken, the explosive development of US shale oil may have peaked.”

“Without a substantial oil price increase, we have likely hit peak growth even as peak production remains in the future,” said Jamie Webster, senior director at Boston Consulting Group’s Center for Energy Impact.

DRIP invests in swap agreements, futures contracts, short positions or other financial instruments that, in combination, provide inverse or short leveraged exposure to the index equal to at least 80% of the fund’s net assets. The index is designed to measure the performance of a sub-industry or group of sub-industries determined based on the Global Industry Classification Standards (GICS).