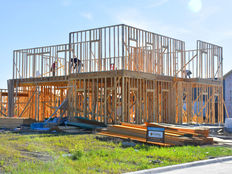 Will 2020 Be the Year for Homebuilder ETFs?

Homebuilder confidence got a boost in light of last week’s data, which showed that construction starts in the U.S. grew to a 13-year high with 1.61 million starts in December, according to data from the Commerce Department. Is this an early indication that 2020 could be the year for homebuilder ETFs to thrive?

The latest data revealed a 17% increase from a revised 1.38 million during the month of November and an increase of 41% compared to a year ago. Per a MarketWatch report, “building permits for privately-owned homes were authorized at a seasonally-adjusted rate of 1.42 million. That was 4% below the revised pace of 1.47 million set in November, but 6% above the rate set in December 2018.”

According to some analysts, the milder-than-expected winter could be a reason for December’s rise in housing starts.

“While gains were shared by both single and multifamily starts and across all regions, we suspect that milder than usual weather in parts of the country normally more wintery in December was behind the monthly spike,” said Avery Shenfeld, managing director and chief economist of CIBC Capital Markets.

Investors can take advantage of homebuilder ETFs like the SPDR S&P Homebuilders ETF (XHB A+). XHB seeks to provide investment results that correspond generally to the total return performance of an index derived from the homebuilding segment of a U.S. total market composite index, and in order to track the performance of the S&P Homebuilders Select Industry Index, the fund employs a sampling strategy.

This year, the central bank has been keen to keep interest rates unchanged. In addition, the central bank alluded to possible rate cuts for the rest of 2019. Once again, however, the rising costs of supplies could keep home prices rising, but that could be tempered if the current labor market remains robust.