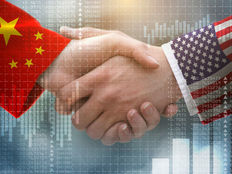 Will US-China Trade Deal Help Drive Up Oil Prices in 2020?

2019 was more kind to the bears than it was to the bulls when considering oil prices as demand for crude has been in the doldrums for most of the year. However, the U.S.-China trade deal could be the proverbial tide that lifts all boats, including oil prices.

Can the recent “phase one” trade deal agreed to by both nations help spur demand for oil in 2020?

“This year, oil demand growth has been at its weakest since 2011, as slowing global economic growth and the U.S.-China trade war weighed on every economy in the world, including on the fastest-growing oil import markets in Asia—China and India,” wrote Tsvetana Paraskova in OilPrice.com. “The phase one trade deal last week is a de-escalation of the trade dispute and could help the outlook on oil demand growth for 2020. Almost all forecasters and analysts expect demand growth to pick up next year from the very low growth this year. WoodMac sees oil demand growth more than doubling to 1.35 million bpd from just 600,000 bpd this year, thanks to marine diesel fuels in China and natural gas liquids (NGLs) demand for the growing U.S. petrochemicals capacity.”