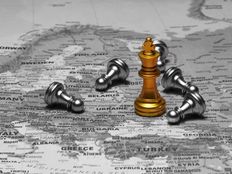 The latest aggressive bid by Russia towards Ukraine could lead to a ratcheting of geopolitical tensions in the coming days due to Russian missiles crossing over into Poland, a NATO member, exploding in a village and killing two. Managed futures have been one of the few strategies able to navigate the choppy waters of geopolitical troubles this year and are worth consideration as tensions rise.

The village was near the Ukrainian border and will be the first time that Russian weapons have been used on a NATO country if confirmed, reported CNBC. Russia fired a barrage of at least 85 missiles across a swathe of Ukraine on Tuesday, targeting civilian buildings and infrastructure, one of the largest strikes since Russia’s invasion in February.

Poland has called emergency security meetings and although there has been no official confirmation of the origin of the missiles, the rhetoric coming from the region is already very strong.

“We of course can speculate, ‘Was it an accident or not?’ But the reality is because [of] indiscriminate Russian attacks on civilian objects for weeks, [we have] now ended up with two missiles killing citizens of Poland on NATO territory,” Artis Pabriks, Latvian defense minister and Deputy Prime Minister, told WSJ.

It’s unclear yet how NATO will respond but its founding treaty is one based upon mutual-defense and the premise that attacking any part of NATO is attacking all of NATO. The only time the NATO treaty has been invoked was post-September 11, 2001.

There has been a history of de-escalation in previous fatal encounters between Russia and NATO countries, but with tensions already high towards Russia, the path forward is unclear.

Why Managed Futures for Geopolitical Tensions?

Managed futures strategies transact in the futures market, where they take long and short positions on asset classes based on how they are performing at the time. When Russia invaded Ukraine in February and sent commodities and global markets into a tailspin of volatility, managed futures were able to navigate through the noise and capitalize on abrupt changes in market direction.

Geopolitical tensions have been a major element of volatility for much of 2022 and the loss of Polish lives could very well turn the crank on those tensions even higher. Managed futures continue to be a haven of non-correlated returns in ongoing uncertainty and market volatility.

Trend-following strategies take the stress out of trying to anticipate market trajectories by only investing based on how stocks are currently moving, not where they might be headed. The iMGP DBi Managed Futures Strategy ETF (DBMF B+) has been a strong performer and immensely popular choice for advisors and investors alike in the challenging environment of 2022.

The fund seeks long-term capital appreciation by investing in some of the most liquid U.S.-based futures contracts in a strategy utilized by hedge funds and has 26.36% returns as of 11/14/2022. It has over $1 billion in AUM and is the largest of any managed futures ETF.

DBMF allows for the diversification of portfolios across asset classes that are uncorrelated to traditional equities or bonds. It is an actively managed fund that uses long and short positions within the futures market on several asset classes; domestic equities, fixed income, currencies, and commodities (via its Cayman Islands subsidiary).

The position that the fund takes within domestically managed futures and forward contracts is determined by the Dynamic Beta Engine which analyzes the trailing 60-day performance of CTA hedge funds and then determines a portfolio of liquid contracts that would mimic the hedge funds’ averaged performance (not the positions).