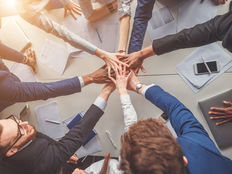 Describing the fund, Lydon said, “This is kind of a spinoff on ESG with the idea that corporate culture and job satisfaction to employees in America is more and more critical these days.” He noted that HAPI is more diversified than a lot of ESG-specific funds, particularly in its unique approach to ESG.

HAPI is based on the Canadian Bank of Commerce Human Capital Index, which recognizes that the most important asset any company has is its people. It can be hard to capture tangible measurements of employee wellbeing and satisfaction, but there’s no doubt that there is value behind that. “If a company can be measured on doing the right thing — also providing profitability, that’s really key and critical,” Lydon said.

The group Irrational Capital has found a way to make these intangibles tangible. Using workplace behavioral science and data science, the group has captured the connection between human capital and value creation. According to Lydon, “We tend to invest in companies for value creation, but that may be at the expense of human capital. What this company does is measure both the value creation, and they give extra points for the ability to overweight human capital in the eyes of the employees.”

HAPI is a brand-new fund, having launched just this week. Jaffe noted that despite its relative newness, some of the companies in its holdings are pretty big, indicating that the fund will not suffer liquidity problems.

Lydon observed, “We’re at lows for the year in the equity markets, and if you are an investor and you’ve dealt with the challenges in the economy, you’ve dealt with inflation, you’ve dealt with challenges in the bond and equity market, and you have some powder that’s dry, and you want to feel good about something that you’d invest in for the next 5–10 years, this is something you might want to take a look at.” Lydon doesn’t know another fund quite like HAPI. Looking at the index, Lydon observed there’s nothing quite like this out there, pointing to the 150 securities scored on employee engagement, motivation, compensation fairness, trust, and transparency. “These factors you don’t see anywhere else grouped together this way,” he said.

Companies like Apple, Microsoft, Google, and Costco are all at the top, but their weightings aren’t in line with S&P. “Maybe they are onto something,” Lydon said. “Maybe they can prove that not just value creation of the business but the way you treat your employees is going to create greater valuation in the business.”

Jaffe noted that though HAPI is relatively new, it does have a sister fund in the Harbor Corporate Culture Leaders ETF (HAPY ).