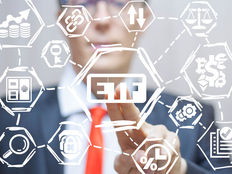 Neuberger Berman Gets Into ETFs With Megatrend Funds

After being in the asset business since 1939, Neuberger Berman entered the exchange-traded fund space for the first time this April with the launch of three new actively managed ETFs that invest in three distinct thematic megatrends: decarbonization, technology disruption, and digitally connected consumers. According to Neuberger Berman ETF Specialist Fred Edwards, when the SEC adopted a new rule in 2019 making it easier for issuers to launch ETFs without first seeking regulatory approval, the firm decided it was time to enter the fray.

It’s increasingly clear that ETFs are kind of a uniform wrapper, and we want to be in the game,” Edwards told VettaFi.

Neuberger Berman had $18 billion in thematic equity investments for global clients. So, the firm issued three ETFs designed to broaden access to investors and advisors. “The idea behind that was to launch cousins, if you will, to existing strategies that we’re running internally,” he added.

The decarbonization-focused fund, the Neuberger Berman Carbon Transition & Infrastructure ETF ( NBCT), is of particular interest from a from megatrend perspective. NBCT targets companies focused on or are transitioning their business to focus on one or more of the following themes: low-carbon resources, electrification, and carbon reduction solutions.

Edwards explained that “there are a lot of passive rule sets governing exposure to this trend,” which Neuberger believes “that there’s going to be a lot of change over the over the coming decades.”

With 50% of global electricity expected to be generated by renewables by 2050, Neuberger Berman believes this represents a $50 trillion investment opportunity.

“I think it’s increasingly clear that this decarbonization trend is more about economics than it is about emissions,” Edwards added. “And we see this playing out over three decades.”

The second megatrend, disruptive growth, has been in play for quite some time. Through the Neuberger Berman Disrupters ETF ( NBDS), the asset manager looks for whatever disruptive growth to own in any environment is, “and that’s the way we play it,” Edwards said.

And as for the connected consumer, which is the focus of the Neuberger Berman Connected Consumer ETF ( NBCC), the theme at play is the transfer of wealth to Gen Y and Gen Z. Over the next 15 years, the digitally native cohort totaling 3.5 billion people is expected to grow its spending by 29% to 54%, and to represent 81% of total global disposable income by 2050.

“I think the world realizes that there will be some changes as it relates to consumer habits, not only what they buy but how they buy,” Edwards said.

The ETF Specialist added that Neuberger Berman felt the need to be active in all these sectors.

While Neuberger Berman doesn’t have any plans to launch other megatrend ETFs soon, Edwards did note that it was planning to convert its $233 million Neuberger Berman Commodity Strategy Fund to become an active, fully transparent ETF later this year.

“Investors are in many instances just kicking the tires on using commodities, so we see that as part and parcel of these trends that we’re seeing, but it’s a smaller trend,” he said. “So, we took the opportunity to convert that fund, and once that’s live, we’re going to take another look at what the marketplace might need down the road.”