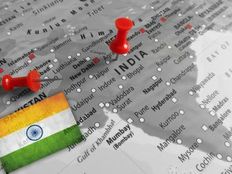 As India Grows and World Slows, Look to IXSE

India is growing rapidly this year while the major world economies all struggle with inflation and economic slowdown, providing investment opportunities for international portfolios.

The United Kingdom is now the sixth largest economy globally with India overtaking the fifth spot in the last quarter of 2021 and continuing to log strong growth this year. India’s economy is expected to grow by 7% this year according to Bloomberg while the U.K., U.S., and other major economies all contend with soaring inflation and economic slowdown with the potential for a recession.

India’s weight within the MSCI Emerging Markets Index is now the second largest country behind China as India’s stocks have experienced an incredible rebound this year. The International Monetary Fund anticipates that India will surpass the U.K. in terms of the dollar on an annual basis this year and Bloomberg calculations put India’s economy at $854.7 billion in the first quarter on a “nominal” cash basis, compared to the U.K. at $816 billion.

The growth of the Indian economy is in sharp contrast to the contraction of the U.S. economy over two consecutive quarters this year, the U.K.’s contraction in the second quarter, and China’s revised lower GDP estimates for the year.

IXSE provides exposure to equity companies within India that have less than 20% ownership by the Indian government by seeking to track the WisdomTree India ex-State-Owned Enterprises Index, a modified float-adjusted, market cap-weighted index that is rebalanced annually. Individual securities are capped at 10% and sector representation is capped at 30%.

The fund utilizes an ESG screen as well to exclude companies in violation of UN and Global Standards Screenings guidelines or that have significant involvement in controversial weapons, the tobacco industry, thermal coal, or that don’t meet other ESG criteria.