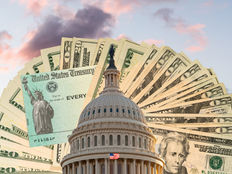 In recent weeks, there’s been plenty of chatter regarding a blue wave – the scenario where Democratic nominee Joe Biden wins the presidency while his party claims the Senate while maintaining a House majority.

Most of that chatter revolves around potential impacts on equities, but a blue wave could have profound effects on fixed income assets, too. Advisors can prepare for that event with the WisdomTree Fixed Income Model Portfolio.

“This model portfolio is focused on a diversified stream of income. It seeks to benefit from secular trends we see evolving in the fixed income markets in a risk-conscious manner. The model portfolio focuses on select opportunities in core sectors, while strategically allocating among sectors and extending the model portfolio’s reach globally,” according to WisdomTree.

If a blue wave comes to pass, Democrats will be expected to engage in heavy stimulus, liking running up massive deficits to do so. That could have consequences in the bond market.

“It seems likely trillion-dollar deficits for the U.S. will become the norm. For the record, for fiscal year 2020, the U.S. recorded a $3.1 trillion deficit,” writes WisdomTree Head of Fixed Income Kevin Flanagan. “The other common thread will be continued easy monetary policy from the Federal Reserve (Fed). Chairman Powell & Co. have made it abundantly clear that rate hikes and/or balance sheet drawdowns will not be on the Fed’s radar for possibly the next two years, at a minimum.”

A few years ago, interest rates had been rising steadily and the belly of the yield curve was significantly underperforming. If an investor was in an intermediate term fund, they would have been lagging the market for over a year, but if they had incorporated a bond ladder holding short, intermediate and longer maturity bonds, they could have been less impacted by the uneven movement of interest rates.

This model portfolio could become increasingly alluring for advisors and their clients if Democrats win the White House and gain control of the Senate while maintaining the current house majority.

“However, looking further down the road, the expanding budget deficit could curb enthusiasm for intermediate to longer-dated Treasuries,” notes Flanagan. “Another consideration for this part of the yield curve could be a rise in inflation expectations due to the Fed’s ‘pedal to the metal’ monetary policy approach.”