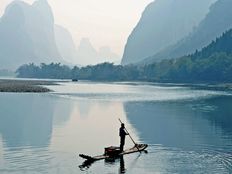 China is leading global equity markets higher this year, expanding on its strong gains from last year. This is particularly true for tech stocks: The pandemic accelerated the adoption of Internet-oriented businesses in China, and we see major growth ahead for China’s tech stars.

But there are serious questions that could affect a longer-term outlook for China, like what to make of the tense political environment.

We expect the Biden Administration will be more friendly to global trade partners, alleviating some pressure on China and the global economy from Trump’s trade wars. Yet not all of the political debate is centered on U.S. actions. Will China’s government take actions to limit the growth of its Internet powerhouses like Alibaba?

We believe the answer is clearly yes. The outcome will be a push-and-pull game among Chinese regulators, entrepreneurs and public sentiments.

Given all the questions surrounding Chinese technology, we want to highlight the most important points for investors:

1. Alibaba’s main business continues to operate with brisk sales growth. As Alibaba grows to larger scale, some of its growth rates are lower than new companies like Pinduoduo, as the latter has been successfully serving Chinese consumers and orienting business toward their buying habits. But Alibaba leads its other main competitor, JD.com, in growth. See the below table that compares U.S. tech and media companies with those of China. One reason we are positive on the WisdomTree China ex-State-Owned Enterprises Index is because leading companies in China are growing at faster rates than comparable technology companies in the U.S.

Politics is only one of Alibaba’s growth headwinds. One thing people outside of China have not appreciated is how competitive the Chinese business environment is in the ex-state-owned arena, particularly in technology and consumer-oriented sectors. In a seemingly duopolistic business environment where Alibaba and Tencent dominate every segment, new companies like Pinduoduo and TikTok are able to rise to challenge them. The top news recently is that Alibaba has decided to shutter its music streaming business as it lags behind Tencent and NetEase, even though it was among the early frontrunners.

2. Alibaba is fully cooperating with the government on regulations concerning Ant Financial. The governor of Zhejiang province expressed how its government is working closely with Alibaba on regulation compliance. Top management has committed to Ant Financial being compliant and working with Chinese regulators in reducing the systematic financial risk.

All news reports indicate that Ant Financial is adapting its leverage and will want to set up good risk management policies. Ant Financial could not become a viable business without a regulatory nod that it will not contribute to systematic financial risk. If Ant got the regulatory stamp of approval, we expect it will enhance Alibaba as a formidable financial player in China’s new digital currency landscape. It is likely that Ant Financial’s sharing of data with Chinese regulators will change from request-only to regular real-time sharing.

3. Jack Ma recently reappeared with an education initiative. Remember, he was an English teacher before Alibaba. It is a positive sign that he is expanding education-related charity. Zhejiang province, the province Ma grew up in and grew Alibaba in, is famous for its formidable human capital in business and culture. Alibaba itself has extensive education initiatives. While it was nice to see Mr. Ma reemerge in the public eye, we don’t want to read too much into it. With the Chinese New Year approaching on February 12, the media environment is generally gearing toward a warm and peaceful atmosphere.

4. We continue to believe investors should stick with the business sales and earnings news of Alibaba and Ant Financial and pay less attention to “palace intrigue” and media gossip. We believe every company in China faces idiosyncratic political risk, both in China and from the U.S. We believe owning a portfolio, particularly an ex-SOE portfolio, is the most prudent and less risky way to invest in China. Below are the sales growth figures of leading U.S. and Chinese tech companies.