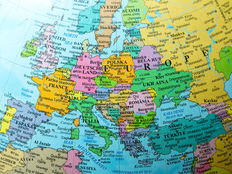 Europe is going through it this year, from the return of a major land war on the continent for the first time in decades to a burgeoning energy crisis. So it would make sense for investors to look elsewhere, right? Don’t be too hasty, as a strong run of corporate sales and EPS beats may be delivering opportunities that can be accessed in a large-cap international ETF like the WisdomTree International High Dividend Fund (DTH B).

According to November research from WisdomTree, the continent has delivered “a strong breadth of sales beats” at 25.5%, and while the economic downturn may have yet to fully take hold in Europe’s economies, the firm believes that large-cap stocks will make a case for themselves as the economy adjusts to the new economic outlook.

The research points to the MSCI Europe Value Index which had outperformed its growth equivalent at the time of publication, with a further point towards energy and utilities firms as the source of some of the better beats. While not specifically focused on Europe, DTH excludes the U.S. and Canada and features a heavy tilt towards Western Europe across several countries.

For example, the ETF holds French energy and petroleum company TotalEnergies SE (TTE) as its third-largest weight, at 3%, Novartis (NVS) meanwhile based out of Basel, Switzerland is held at 3.44%. Mining firm Rio Tinto (RIO) comes in as the fourth-largest at 3%, meanwhile, based out of London.

The large-cap international ETF has also outperformed the ETF Database Category Average over one month and three months, returning 9.2% and 10.7% respectively. Charging 58 basis points for its exposures, it offers both substantive exposures to Europe as well as respectable dividends. For investors looking abroad for an international equities slice, a Europe-flavored ETF like DTH could be one to watch.